Vertical tasting of a cult classic

Huge thanks to legendary BC wine writer John Schreiner for allowing me to copy this column from his blog in it's entirety.

At a recent wine tasting, one of the guests asked: “What is a cult wine?”

It is a top quality wine highly prized by collectors. They get their names onto a winery’s VIP list and get in line to buy each release when the winery announces it. They usually buy it six to 12 bottles at a time.

The most enduring cult wine from the Okanagan is Nota Bene, the flagship blend from .

Paul Guedes (below with wife Kara) is a businessman who has collected Nota Bene in each vintage since that wine debuted in the 1999 vintage. 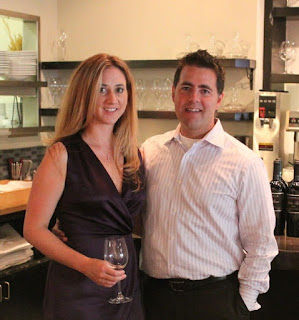 Recently, to celebrate his and wife  ninth wedding anniversary, he invited some of their closest wine-loving friends to a dinner at which 12 vintages of Nota Bene (1999 through 2010) were served. The venue was a cozy restaurant called Kitsilano Daily Kitchen where chef Brian Fowke prepared an astonishing nine-course dinner, pairing the tapas-sized courses with the wines.

Because the Okanagan is a young wine region, vertical tastings like this seldom happen. I can think of just two other cult wineries – and Burrowing Owl – that began releasing wines in the 1990s. Black Hills opened in 2001, nine years after and three years after Burrowing Owl. There were other excellent wineries that opened, or were open, in the 1990s but none sustained the cult following that leads to collectors cellaring each and every vintage. (I expect a few producers might take issue with.)

Black Hills was launched in 1996 when two couples – Peter and Susan McCarrell and Bob and Senka Tennant – purchased an abandoned vineyard on and planted 36,000 varietals on 26 acres. In 1999 they decided to open a winery, making wine with half of the vineyard’s production while selling the rest. That gave them cash flow while they developed the brand.

The first wine was Nota Bene 1999. It was well received by a number of reviewers.
In a prescient review at the time, if I may pat myself on the back, I wrote: “A Noteworthy and Collectible Wine. For collectors of wines, the latest must-have wine is the 1999 Nota Bene from , a producer near Oliver which has just opened. This has all the marks of becoming a cult red wine capable of appreciating in value." 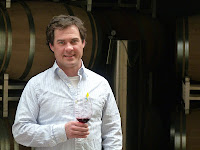 Senka Tennant, with some initial coaching by telephone from consultant Rusty Figgins, made Nota Bene from 1999 through 2007. She had a hand in making the 2008 as transitioned to new ownership and to the current winemaker, Graham Pierce (right). This comparative stability in winemaking has meant that Nota Bene’s style has been reliably consistent across all of the vintages.

When the McCarrells  wanted to retire from the wine industry, was sold in late 2007 to Vinequest Wine Partners Limited Partnership. The Tennants took a few years off and then opened Terravista Vineyards in 2011, a Naramata boutique offering only two white wines.

Vinequest president Glenn Fawcett financed the purchases and the subsequent expansions at through the sale of units to investors. Paul Guedes is not an investor but is an enthusiast for wines.

Currently, is owned by about 450 investors who, among other perquisites, get a free case of Nota Bene each year. With the wine now selling at $53 a bottle, that is a good dividend. It is just one of the privileges of ownership.

Vinequest Wine partners have doubled the winery’s total production to about 10,000 cases a year. However, the production of Nota Bene is capped around 4,500 cases a year, safeguarding the quality of the wine as well as its comparative scarcity.

Obviously, Paul has a temperature-controlled cellar with excellent storage (constant 54 degrees F), because none of the wines had fallen apart.

Here are my notes:

Nota Bene 1999: The fruit aromas and flavours have matured, developing earthy notes and ephemeral fruit favours that typify a well-aged wine. The complexity reminded one taster of an aged Italian red from .

It so happened I still had a bottle of the 1999 in my cellar. In view of the vote – it was not my top pick - I opened it the following day. The fruit in my bottle was more vibrant (one expects bottle variation as wines age), deliciously sweet up front with a spicy berry note on the finish. It has begun to slide from its peak, but with remarkable elegance.
.
Nota Bene 2000: The wine has notes of delicate truffle aromas, with flavours of plum, cassis and cigar box. The texture is polished and elegant.

Nota Bene 2001: The aroma is smoky and spicy but the mid-palate is lean and dried out. It reminded me very much of an old Chianti, with its short, dusty finish.

Nota Bene 2002: This is a surprisingly satisfying wine, beginning with dark hue and a texture that is big and bold. On the palate, the ripe plum flavours are juicy and generous. The wine is at its peak. I reviewed this wine when it was released and wrote that it was the best Nota Bene to that time. It still outshines the previous three, in my view.

Nota Bene 2003: This was a hot Okanagan vintage and the atmosphere was saturated with smoke from the forest fires. There is just a touch of smoke on the aroma and in the flavour of this wine, along with notes of plum, black cherry and olives.

Nota Bene 2005: This begins with a seductive aroma of vanilla and cassis. The wine delivers a big spoonful of sweet fruit to the palate (lingonberry, cherry, raspberry) with long silky tannins and with a persistent finish. This was my favourite. I prefer the lively fruit aromas and flavours to the elusive notes of some older vintages. 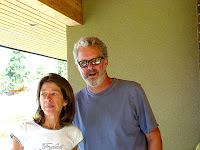 Nota Bene 2006: This wine is a milestone for , which had replaced its challenging Quonset Hut winery with a new winery, well equipped with all the tools needed for modern winemaking.  The 2006 is full on the palate, with distinctive aromas and flavours of blueberry and cassis. When the wine was released, winemaker Senka Tennant (right with Paul Tennant) described it as “appealing for its layers of dark fruit with a hint of spice, olives and cedar on the nose; full bodied and balanced with silky velvety tannins and a great lengthy rich finish.”

Nota Bene 2007: The firm structure and power of this vintage marks it as a good candidate for further cellaring. However, it is already appealing with spice and cassis aromas and with earthy plum flavours.

Nota Bene 2008: This begins with an appealing aromas of red fruit, vanilla and mocha. It is rich and ripe on the palate with flavours of plums, black cherries and vanilla. On the finish, there are hints of chocolate, red berries and spice.

Nota Bene 2009: I am surprised no one voted for this wine. I found it one of the best on the table, with dramatic aromas of vanilla and cassis, followed by flavours of black currant, coffee, mocha and cedar. At a previous tasting when this wine was released, I noted vanilla, eucalyptus and dark fruits on the nose, with flavours of plum, black cherry and chocolate. This has lots of time ahead it.

Nota Bene 2010: At this stage of life, this wine is tight as a drum. It begins with aromas of raspberries and pepper and tastes of cola, coffee and vibrant red berry notes. It has the classic cigar box notes on the finish that signal the heritage of this wine. Opening the wine now is infanticide.
Thanks again, John!
I don't usually reprint other people's entire work (and don't intend to start on a regular basis) but this particular column fascinated me; for one, as John noted above, you aren't going to see vertical tastings of this magnitude on BC wines as there just aren't enough of them out there that have been around this long; and two, because I have this little beauty in my collection: 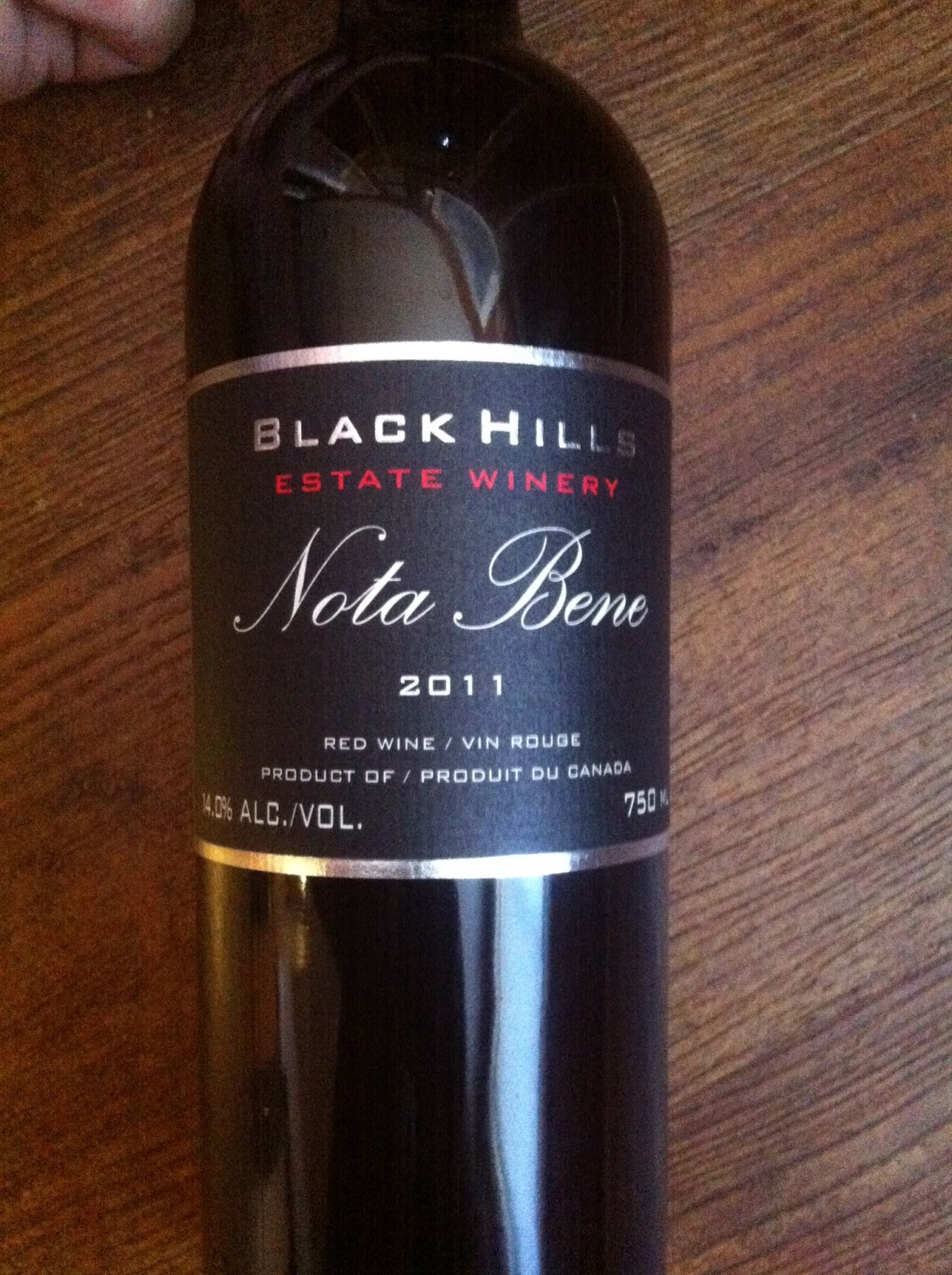 The 2011 vintage wasn't even part of their tasting, as it would definitely not be anywhere near it's peak at this point (John pointed out that opening up the 2010 at this point was "infanticide"). Judging by John's comments, it looks like 11-12 years is about the sweet spot for this wine; although the winning wine in terms of votes was actually the oldest vintage from 1999. I currently have this one marked to open in 2021, and I think I may push that back a year or two; we'll see. Either way, I'm sure it will be a special treat even if I open it after "ONLY" 10 years in the bottle.

Very exciting! I am pretty sure I'll be able to get at least one bottle of this wine from my local VQA store every year going forward; who knows, maybe in 13-14 years I'll be able to hold my own vertical tasting of this highly sought-after wine!

Here is a link to John's excellent wine blog: