This past Saturday we hosted a wine party with some good friends. The highlight of the party was a complete 8-year vertical tasting of La Stella's Super Tuscan blend called Fortissimo. Let's get right to the results.

It also happened to be the birthday of one of our dear friends, so we started off the night in style:

Rich and full-bodied, notes of tropical fruit and toasty oak. Creamy texture with a long and persistent finish which features some floral notes. I've had Dom a few times in my life and was never that impressed, and regular readers know that bubbly is not my thing, but this was pretty spectacular. 95.

Now, on to the main event! To buy a new vintage bottle of this wine will set you back about $40 with taxes; obviously if you can find the older vintages they are going to go for a premium.

All the wines were decanted for about an hour before the guests arrived. Food was chosen to pair nicely with the red blend, including Tuscan-style Pork, cheese stuffed meatballs and Filet Mignon with a red wine sauce and pink peppercorn butter. 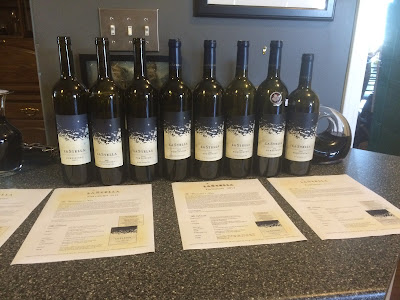 Mocha, black cherry, dried herbs, tobacco and earth on the fragrant nose. Complex flavors of black currant, black cherry, tobacco, leather and cedar on the palate. The years in the bottle have done wonders for this wine, bringing it together beautifully. Lots of fruit left suggests it has a few more good years in it as well. This was my favorite of them all and was well-regarded by all the tasters. 94.

Slight name change for one year and the Sangiovese joins the party, around 8% of the total made up of this traditional Italian grape. About the same amount of Cabernet Franc, while the bulk is made up of almost equal parts Merlot and Cabernet Sauvignon.

Cherries dominate the nose and palate here, with some sweet red berries as well. Full and rich mouthfeel and a lovely finish. This was another well-liked vintage by all. 92.

2009 was a terrific year in the Okanagan and we were all really anticipating this one, which is the only one that I found disappointing. Black and red currants and a strong dusty note of earthiness on the nose. Some blackberry and floral notes on the palate. It certainly wasn't awful, but it was (BY FAR) the least favorite of everyone at the dinner party. 88,

Holy Cab Franc, Batman! By far the highest percentage to date which pleased my dinner party full of Cab Franc fans. A lot of experts have called the 2010 season a "vin garde" year (which loosely translates to "guard wine", meaning cellar it for longer time), so we didn't know what to expect from this one, but it was terrific. The aromas jumped right from the glass, floral and dusty and fruity all in one. Black fruit, vanilla and dark chocolate on the palate which finishes well. Lovely and another one that was highly regarded by all. 92.

Red cherry, vanilla, red currant and dusty notes on the nose. Fruit heavy on the palate, black and red berries and plum all mingling together. Some vanilla and mocha comes through at the finish. Another well-liked year, with a couple of the guests putting this right near the top of their list. 91.

Cab Franc fans rejoice! This is the highest the blend has ever seen and it shows. Beautiful aromas of black currant, mint and cherry with just a touch of the dustiness that the Sangiovese can bring. Red and black fruits combines seamlessly on the palate with a long, intense finish. This one is drinking beautifully right now but will improve even further. So good, well loved by all. 93.

The highest percentage of Sangiovese we've seen to this point. Aromas of blackberry, herbs (basil?), smoke, vanilla and pencil shavings. Notes of earth and tobacco, with berry flavors and vanilla in the mix. Terrific now and well-received by all, but some more time to fully round it out would not hurt. 92.

We tasted and reviewed this one at the winery in July, here, and my thoughts did not change, although the bouquet added some lovely floral notes. As I mentioned in that review, I recommend laying this one down for a few more years to let it fully develop, but many of my guests disagreed and thought it was ready now. Either way, it was delicious. 93.

To finish off this night of great food, great friend and great wine (and is there really anything better??), we decided to treat our wonderful guests with the best red wine we have ever tasted, which we enjoyed on our recent Caribbean cruise:

As close to perfect as we have ever experienced in a wine, and to no surprise, all the guests agreed this was truly a great wine.

What a great night!

Next up: We return to the Okanagan trip report, as previously promised, at Mission Hill.
Posted by Mean Dean at 10:53 AM 1 comment: