Alrighty, wine lovers, today we are going to take a long trip East, to Italy, and discuss this:

A good friend of mine used to date a girl that worked in the wine industry; he told me that she had once called Barolo the "King of Grapes". Since I trusted her wine knowledge, I thought I'd find one and try it as soon as I could.

Interestingly enough, she didn't know quite as much as I thought, not only is Barolo not the "King of Grapes", it's not a grape at all! More on that later.

The same friend and I were down in Vegas last November, having dinner at Gordon Ramsey Steak in the Paris hotel. Their wine list, which was extensive (and came out on an Ipad!!), featured this little beauty: 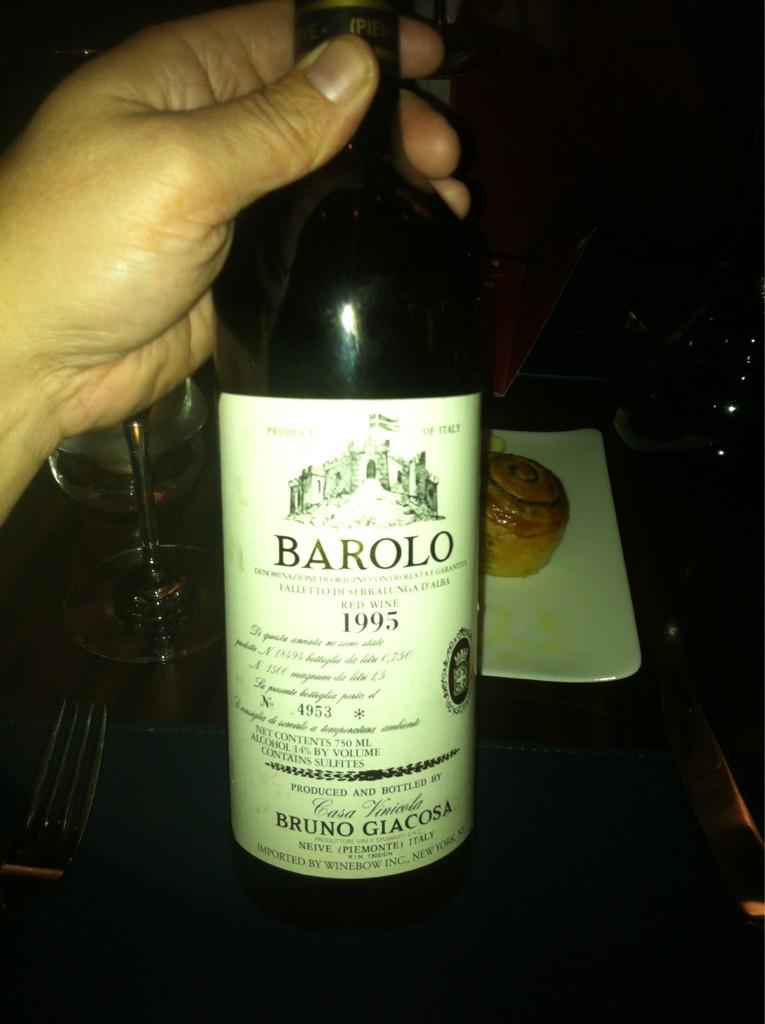 That's right, 1995. A 17 year old (at the time) bottle of wine, from Bruno Giacosa, one of Italy's finest Barolo makers. The price? Actually not nearly as much as you think. $150. Yes, I know that's hardly cheap, but remember this is in a very posh restaurant, where the price is likely doubled from the retail price (maybe more). If I could find another bottle of this stuff on a shelf for $75, I'd buy it in a heartbeat.

My rating on this wine would be 9.5/10. It's simply outstanding, as you would expect.

After I was home, I was at a high-end wine store in West Vancouver and I thought I'd buy a nice bottle of wine to give to Tracey for Christmas. See, I give her a great bottle of wine, which she will love, but I get to enjoy it as well. I'm tricky that way.

So I found this: 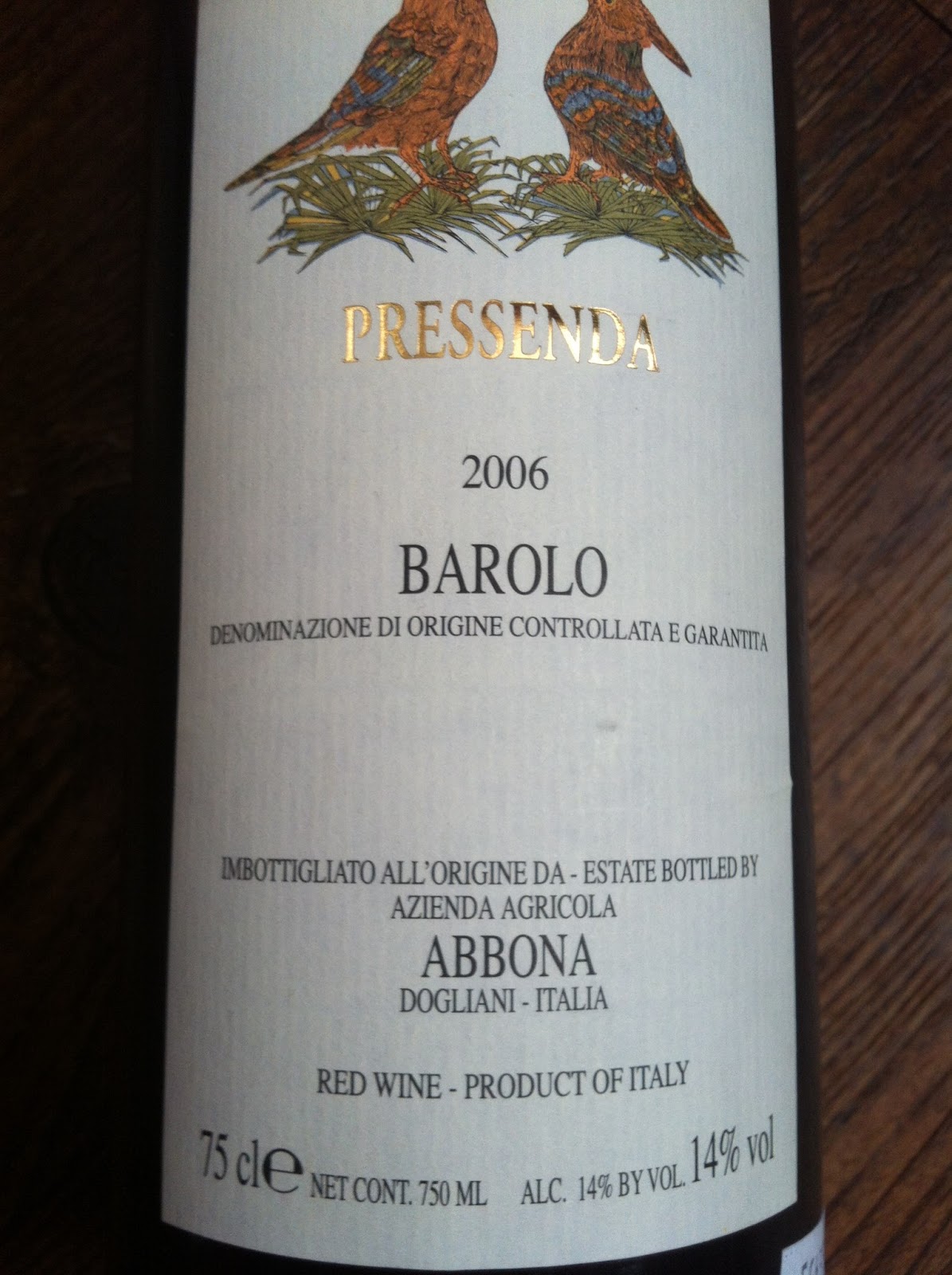 So for a reasonable price of $90, I picked it up. Needless to say, she was excited to get the bottle under the tree, even though she will probably have long forgotten about it before we ever get to drink it. Barolo wines are generally very tannin-heavy, and aging them is a must. This one sits in our cellar, to come out in 2019 for our 15th wedding anniversary. By then, it should be freaking amazing.

Since I've got some time on my hands, I thought I'd do a little research on this particular bottle of wine, and also on wines of the world in general. It was during such research that I discovered that Barolo, as I mentioned above, is not a grape at all. From the Wikipedia page:

<<<Barolo is a red Denominazione di Origine Controllata e Garantita (DOCG) wine produced in the northern Italian region of Piedmont. It is made from the Nebbiolo grape and is often described as one of Italy's greatest wines.[1] The zone of production extends into the communes of Barolo, Castiglione Falletto, Serralunga d'Alba and parts of the communes of Cherasco, Diano d'Alba, Grinzane Cavour, La Morra, Monforte d'Alba, Novello, Roddi, Verduno, all in the province of Cuneo, south-west of Alba. Only vineyards planted in primarily calcareous-clay soils in the hills with suitable slopes and orientations are considered suitable for Barolo production. Barolo is often described as having the aromas of tar and roses, and the wines are noted for their ability to age and usually take on a rust red tinge as they mature. When subjected to aging of at least five years before release, the wine can be labeled a Riserva.[2]>>>

I found this quite interesting; as someone who learned about wine from mostly local wines, I'm used to seeing the name of the grape on the wine. When I walk into a wine store, I'm looking for a Pinot Noir, or a Chardonnay.....but those of you who know wines of the world will know what I have recently learned; most of the wine making world doesn't do it that way.

The grape is Nebbiolo; but nowhere on this bottle of wine, front or back, does that word appear. I decided to try to figure out what everything on the bottle is. I know that the phrase right under the word "Barolo" indicated that the wine qualifies as a DOCG wine, which is the highest rating an Italian wine can get; and I know that ABBONA is the winemaker/winery, Marziano Abbona. Dogiani is a town in Piedmont, the region where the grapes are grown, and PRESSENDA is the name of the wine, and indicates which of the Abbona vineyards the grapes were grown in.

That's a lot of information on the label of a wine, WITHOUT mentioning what grape is actually in the bottle!!

If you are interested in reading more about Barolo wines in general, here is a link to the Wikipedia page:

And some information on this particular winery: