yeah I know that doesn't make much sense. It's all I got. Live with it. 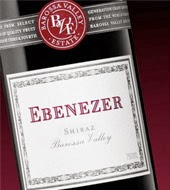 Lovely on the nose, notes of berries, plum jam and leather. The palate is very plummy, with just a touch of white pepper and oak. Not bad at all, but it's one of those that is better on the nose than on the tongue. 84.
Posted by Mean Dean at 6:07 PM