....and the freaking fruit flies which are out in force tonight. It's like even the fruit flies know great wine when they get near it.

We will return to our regularly-scheduled programming, the Okanagan wine tour review, tomorrow.... but for now, a head to head tasting of two of the best Cabernet Francs we have ever had. 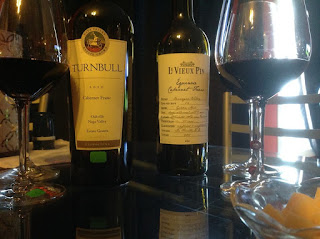 The one on the left will be familiar to many of you, we've enjoyed a couple bottles of it and I had previously reported on it here, during our Napa wine trip last September.

At that time, I gave it a very nice score of 90. The last time I tasted this wine (on our Alaskan cruise), I thought I had probably underrated it. Tonight, I'm absolutely sure I did.

The one on the right is new to us, it's a super-exclusive example of this varietal from Le Vieux Pin in the Okanagan. We started off the evening by just opening up the LVP one, but quickly on decided to taste it side by side with the wine that actually got us liking Cab Franc in the first place.

It's almost inconceivable (you keep using that word! I do not think it means what you think it means!) that these are the same varietal. While the Turnbull features a spicy jalapeno mingling with berries on the nose, the Le Vieux Pin is all about cigar box and leather. There are some cherries there as well, but they linger in the background. Interesting that the younger of the wines exhibits characteristics that you might associate with aging.

On the palate, the differences are amplified. The fruit continues to dominate the Turnbull, and although the fruit flavors on the palate on the LVP are more prevalent than they are on the nose, they are still dwarfed by the leather and tobacco. The fruit comes up at the very end. Both wines have a terrific long finish, but the LVP seems to take about a month to really finish. It's quite remarkable.

As you can probably tell, we thoroughly enjoyed both wines....so far....but let's see how they pair with tonight's dinner of Beef Wellington.

God dammit, I overcooked my Welly. My wife is pleased, as she likes her steak completely ruined (in other words, Medium Well), but although mine came out of the oven perfectly Medium Rare, it was quite overdone by the time it went from pan to plate to table. This is one of the toughest culinary challenges I ever face.....how to get the pastry cooked and still keep the steak Medium Rare. I've managed to do it a few times, but from time to time I muck it up.

Back to the wine. The LVP went nicely with the meal, didn't seem to change much. The flavors agreed with the Wellington. The Turnbull changed more; picking up an almost Syrah-like peppery quality on the finish. I wouldn't go as far as to say it improved with the food, but it certainly didn't regress. Both were fabulous.

Which did I prefer? That's a bit like asking which of my cats I love the most. That's not true, all of our cats are great but there is no doubt that our boy cat, Jackie Chiles (yes, named after the lawyer in Seinfeld) is the most awesome. Just look at that face. 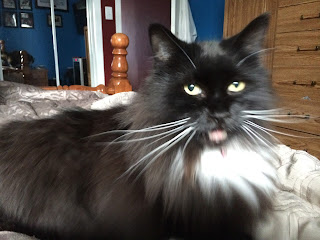 Jackie is actually French. In this picture I can hear him saying "Daddy, ah, zis is, ah, how you say, ridiculous. Now I sink you should go and, ah, cook up zome beurre blanc".

Jackson loves him some beurre blanc.

Anyway, here are my ratings on the two wines we are enjoying tonight:

Both are sublime and worth every penny.

Tomorrow, or maybe later tonight, I'll get back to the Okanagan report!