Our second trip to the annual Vancouver International Wine Festival was twice as long as our first foray last year, and twice as good. Two trips to the Acura Tasting Room and six hours of tasting in total (and that was still not enough). Plus, the incredible Dine Italia lunch at La Terraza. Amazing.

Australia was the featured country this year and we tried to focus as much as we could on getting through the myriad of wineries presenting their wines; the problem was, everyone else was doing that too. We did our best, but still only got to taste something from 36% of the Australian wineries. Unreal.

Upon arriving in Vancouver on Friday, we had a couple hours before check-in time at the Loden Hotel where we were staying. We went to Marquis Wine Cellars on Davie, where I had only been once before and my wife had never visited. A really terrific store which features a huge selection of wine, many I haven't seen anywhere else. We picked up two bottles there:

and, this intriguing little beauty: 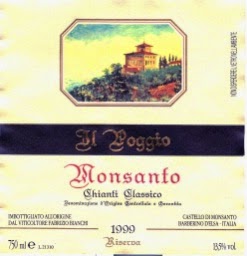 I love me some aged Italian wine. The nose on this was fabulous and expressive. Cherries, vanilla, leather, tobacco, all intermingling with a floral background.

The palate, however, left a lot to be desired. Even after aerating and decanting for an hour, the flavors were muted and unappealing. The longer the wine sat in the decanter, there was a noticeable improvement, but it only went from "undrinkable" to "pretty good". At the price we paid for it, a real disappointment. 83.

Perhaps we just had a not-so-great bottle, as I've seen many terrific (recent) reviews of this wine online, so it's tough to imagine that it is an aging problem. This wine should have been good for many more years, but it seemed to be in rapid decline.

After visiting another boutique wine store, we headed to our hotel and checked in. We relaxed for a half hour or so before heading to our pre-event dinner at the Cactus Club next to the Convention Centre. It was actually the first time I had seen the Olympic Cauldron in person. Interesting.

So after a lovely dinner, we headed to the Convention Centre for the event. When the doors to the Acura Tasting Room opened, we joined the throngs of tasters who headed right for Australia. As with last year I won't give complete tasting notes to every single wine we tasted, but I will provide my notes on everything we bought. You'll notice we didn't actually buy a ton of wine from Australia, most of our purchases came from other countries. More on that later. Below are my notes and scores for every wine from the featured country we tasted, grouped by region (in the same order they appeared in the event program and listed in RED).

This was named "Best In Show" two years in a row at the Vancouver Magazine Wine Awards, so I was anxious to try it as I never had any luck finding it anywhere. It certainly did not disappoint. Toasty hints of grapefruit and peach on the nose with a slightly oaky influence. Beautiful fruit flavors, excellent minerality and balanced acidity. A top-notch Chardonnay and perhaps the best Australian wine we tasted in two days. Definitely in the top two. We bought three of these. 93.

We probably would have purchased each of the last two, but these are easy to find in any BC Liquor Store. We will get them for sure.

Dark fruits, baking spice and earth on the nose. A touch of that funky forest floor that can exist. Blackberries and plums mingle with a note of black olive on the palate. A hint of black pepper on the long, long, long finish. A beautiful example of Aussie Shiraz. So young, I'm putting mine away for a few years and I'm expecting brilliance. It's fantastic already. 93.

We loved all four of these. My wife absolutely freaked out for the Hermit Crab, and we would have bought some but they were sold out by the time we went to check out after the tasting. Going to have to hunt some of those down.

Dark fruits with a touch of spice on the nose. Complex and rich on the palate with a bit of dark chocolate and vanilla. Drinking nicely now and some extra bottle time would ever enhance. A really nice Shiraz for this price point. 89.

Malbec? I bought a Malbec?? Damn right. Fresh berries dominate the nose. A hint of toasty oak. The berries continue free to the palate with a touch of chocolate. At this price, it's a steal. We've already consumed the one we bought, but we'll get more. 88.

Intense aromas of black cherry and blackberry. A touch of fennel and spice. Blackberry and cassis on the palate. Finishes with great length. 89.

My wife thought I under-rated this, she loved it and we bought two bottles. We enjoyed one of these last night and I'm going to stick to my rating, but it's pretty close to 90. It's really terrific.


That's it for Australia! As you can see, not a bad wine in the bunch, but not as many fabulous Shiraz's as I was expecting. Was pleasantly surprised with the quality of their reasonably priced Cabernet Sauvignons.

Next up, the rest of the world, and a full report on Dine Italia!
Posted by Mean Dean at 3:10 PM