Time to give Trump DAS BOOT....but until then, let's talk about German wine....

...and given the current political climate in the country directly south of us, I'm going to refrain from making the obligatory jokes about Germany and their past history of being......say......not so nice.....

But they are nice now. Who would have ever thought we would live to see the day that the Chancellor of Germany would be the de facto "Leader of the free world"?? Hitler just rolled over in his grave.

And I mean ACTUAL Hitler, not the buffoon currently occupying 1600 Pennsylvania Avenue.

Our most recent "theme" night, as our dear friends hosted a simply fabulous night of German food and wine. Now, I'm fairly familiar with German wine, but when I think "Germany", well, great food doesn't necessarily jump to mind. That was about to change.

Prices listed below are estimates.

Not a beer guy at all, but this was pretty damn good and it went beautifully with the pretzels, which were the best I've ever had. By a mile. Even though I knew there was a lot of food coming, I had to have a couple of these. Incredible.

For fun, we opened up this adorable little bottle: 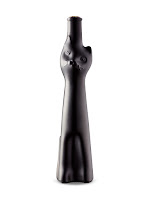 Sure, it's a gimmicky bottle, but the wine was  tasty. Not particularly sophisticated, but perfectly flavorful. Green apple, pear and minerality abound. 86.

Nice pairing with this delicious dip. Lots of petrol aromas developing as this bottle nears a decade. Fruity and well-balanced acidity, flavors of pineapple and a hint of spice at the end. 88.

This didn't pair well with the food, but it's not the food's fault....it just wasn't very good. None of the diners enjoyed this bottle. 77.

The dumplings were terrific, wine notwithstanding.

So this is kinda what I think of when I think of German food: big hunks of meat, boiled, which takes a lot of the colour out of them, so they all end up looking a bit grey. That was sort of the case here too...but then I tasted them!! Oh my. I can't remember how many kinds of meat there were (I lost count), but they were all terrific and the ham might have been the best I've ever had. If not, definitely in the top 3. So delicious.

This wine featured intense aromas of white flowers and citrus, particularly lime. 42g of residual sugar but it doesn't come across as sweet at all. 8.5% alcohol, so it goes down reallllly easy. 89.

Petrol is there but not as prevalent as you might think for a decade old. Aromas of honey, ripe tropical fruit, grapefruit and orange peel. Honeysuckle, pineapple and pear on the palate. Very nice. 90.

Another fun and delicious theme night! Riesling is king in Germany, no doubt about that.

Next up for the wine blog, will be another Okanagan trip report, as we head to Kelowna/Lake County/Penticton next weekend for a few days of random wine tastings and one of our favorite events of the year, the Quails' Gate Barrel Club party at their lake house. Can't wait!

Next theme night comes up in a few weeks, when it's our turn again to do the entertaining. It's going to be a big one (not that they aren't all big), as we are tackling the United States of America. You know, the country going to Hell in a handbasket right now.

Hopefully they don't get us all nuked before then.