BIG HUNKS OF MEAT, and an epic vertical of Syrah, and some spectacular other stuff.....

Last night was "Big Hunks of Meat" night at our house, just an excuse to get together with friends and finally devour the Le Vieux Pin vertical we had been planning for a while. When we were up at LVP last month, they were selling some older vintages of their spectacular flagship Syrah, so we brought a few home.

Although this night was all about Syrah and red meat, we wanted to start with something lighter and refreshing so with a chicken dish, we opened this one:

Apricot is the real star on the nose, but if you pay attention you'll also get some cantaloupe and orange blossom. Off-dry and delicious, flavors of orange, honeysuckle, stone fruit and pineapple. The best one ever. 89.

At this point, it was time to start off the BIG HUNKS OF MEAT, beginning with Prime Rib with a peppercorn crust. And the vertical, each wine had been decanting for a little under 2 hours. 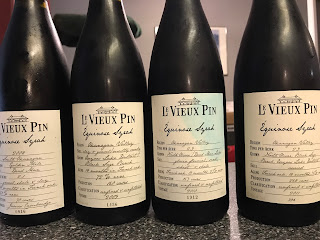 Aromas of pink and white peppercorn, lilacs, game, licorice and a hint of cigar box. This one, the oldest, was the one that was least impressive right out of the gate, but did open up and improve as the evening went on. 90.

A hot hot hot growing season produced a pretty wine, very feminine in it's floral notes but masculine in it's gamey and meaty notes. Red roses and lilacs abound on the nose. Beautiful, long finish which gets just a touch peppery at the end. Fabulous. 94.

From a much cooler vintage, this is the one that popped from the bottle while I was pouring the wines into the decanters. Unmistakable aromas of violets, blackberry, roses and cherry, with pink peppercorn also making an appearance. Beautiful black fruit dominates the juicy and complex palate. Finishes long and luscious. Universally the favorite of the night, and a real treat. 95.

Violets, white pepper, blackberry and a touch of red licorice on the nose. Smooth and silky mouthfeel with flavors that mirror the nose. A fairly uneven, cold growing season has produced a wine that is elegant in it's simplicity, pretty and feminine. 92.

We were well into our "steak" courses at this point, with some Filet Mignon bites alongside a grilled flank steak with chimichurri sauce, and we figured we could handle one more good bottle of Syrah. Holy cow, did we ever find one.

An intense inky purple colour. The aromas jump from the glass and dance seductively across your olfactory senses. Black fruit and BBQ meat, cedar, licorice, mint, lavendar and sage all take their intoxicating turn. The palate is as complex as I have experienced. Blackberry, boysenberry, mushroom, cinnamon, nutmeg, blueberry, raspberry. Full-bodied and ridiculously decadent, this is a tour-de-force in winemaking and is nearly flawless. Find one (or more) of these. 98.


And if that wasn't enough, we figured we'd crack open our last bottle of my 99-point Velvet Sisters Pinot Noir (review here).

That was a pretty spectacular night of wine, I must say.

Next up: So much more wine to catch up on, and I still have to report on the terrific Germany night we had a few weeks ago. Stay tuned!