Only took me three and a half months to get to it!

This was the second year we have attended this event and it's tough to imagine we won't go every year. It's a fabulous evening of food and wine, and this year they ratcheted up the entertainment quite a few notches. Last year the entertainer was some generic white rapper (and basically if you are a white rapper and your name isn't Eminem I am not going to be interested) who was really quite terrible. This year, they brought in former Barenaked Ladies front man Stephen Page! Just a bit of an upgrade. 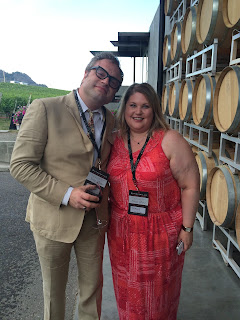 He put on an excellent performance, except when he pretty much completely forgot the words to one of their biggest early hits, "Enid". Give him credit though, he didn't just try to mumble through, he screamed to the crowd "dammit I forgot the words, who knows the words to this song??". LOL. He was friendly and patient, taking pictures and chatting with anyone who asked.

As always, the wine was flowing. And flowing and flowing. It was our first taste of many of the wines.

Blackberries, cherry and a touch of forest floor on the nose. Palate is dominated by berries and is juicy with a long finish. Tannins were really intense when we tasted it, suggesting that this will improve quite a bit with some time in the cellar. We took our allotment and put it all into the cellar and will report back when it matures. For now, this was a bit underwhelming. 86.

Aromas of black cherry, blackberry, smoke and a touch of spice. Blackberry and cherry come through on the palate, joined by a touch of cigar and coffee. Another one which is going to much improve with some more time but is quite nice now. 88-91. 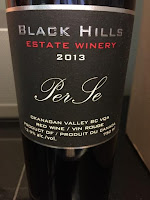 Due to the limited amount of Carmenere available, this blend of Cabernet Franc (62%) and Syrah (38%) was produced to meet the club members allocations. It will probably never exist again, which is really a shame. Hope I'm wrong on that. Notes of clove, vanilla, meat, blackberry and cedar waft over your olfactory senses. Flavors are complex and juicy. Dark chocolate, vanilla, cold cuts, ginger and even a touch of orange. Intoxicating aromas and flavors. It's really quite spectacular for a first effort at this combination. 92.

An exceptional 2013 growing year really shows through in this one. Aromas of black fruit, ripe cherries, violets, mint and a touch of spice. Rich and juicy palate featuring some berries, spice, smoke and cigar box. Full bodied with well-integrated tannins but another one that will smooth itself out with some careful cellaring. Unlike a lot of Cabernet blends it's quite drinkable now but if you can wait a while, you won't be sorry. 93-95.


Well there you have it, finally the Okanagan trip report is finished. Hope you all enjoyed the read.

Next up: Our Disney trip last month also produced some great wine tasting!