Our evening at Black Hills was actually two-fold; we began with a private Cabana tasting of their entire portfolio. As wine club members, this was completely free for us, and it was a terrific experience. My reviews of all the wine at the bottom of this post. 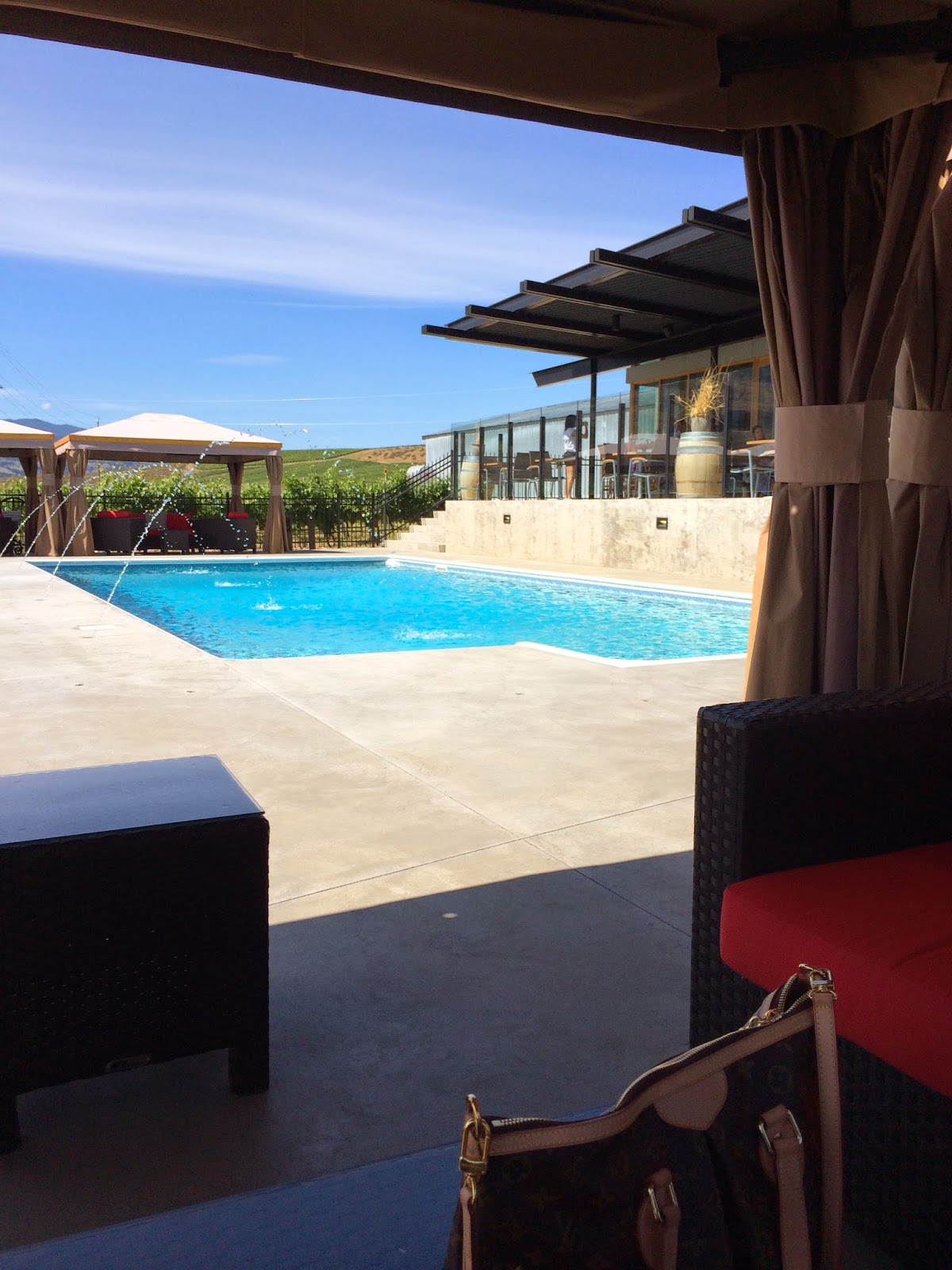 The view from our Cabana, of their lovely little pool. Apparently jumping into this pool is frowned upon.

Up the road a couple hundred metres to the venue for the party, and we were greeted by a dance troupe, acting as human statues. Yes, human statues. And they were pretty good at it. I couldn't stand that still for 4 seconds.

The evening featured some terrific food and a heck of a lot of good wine. We had the opportunity to taste some wine in a sensory deprived room; completely dark. We were supposed to guess what the wine was; I couldn't have been much farther off. Tracey got at least one of them right. 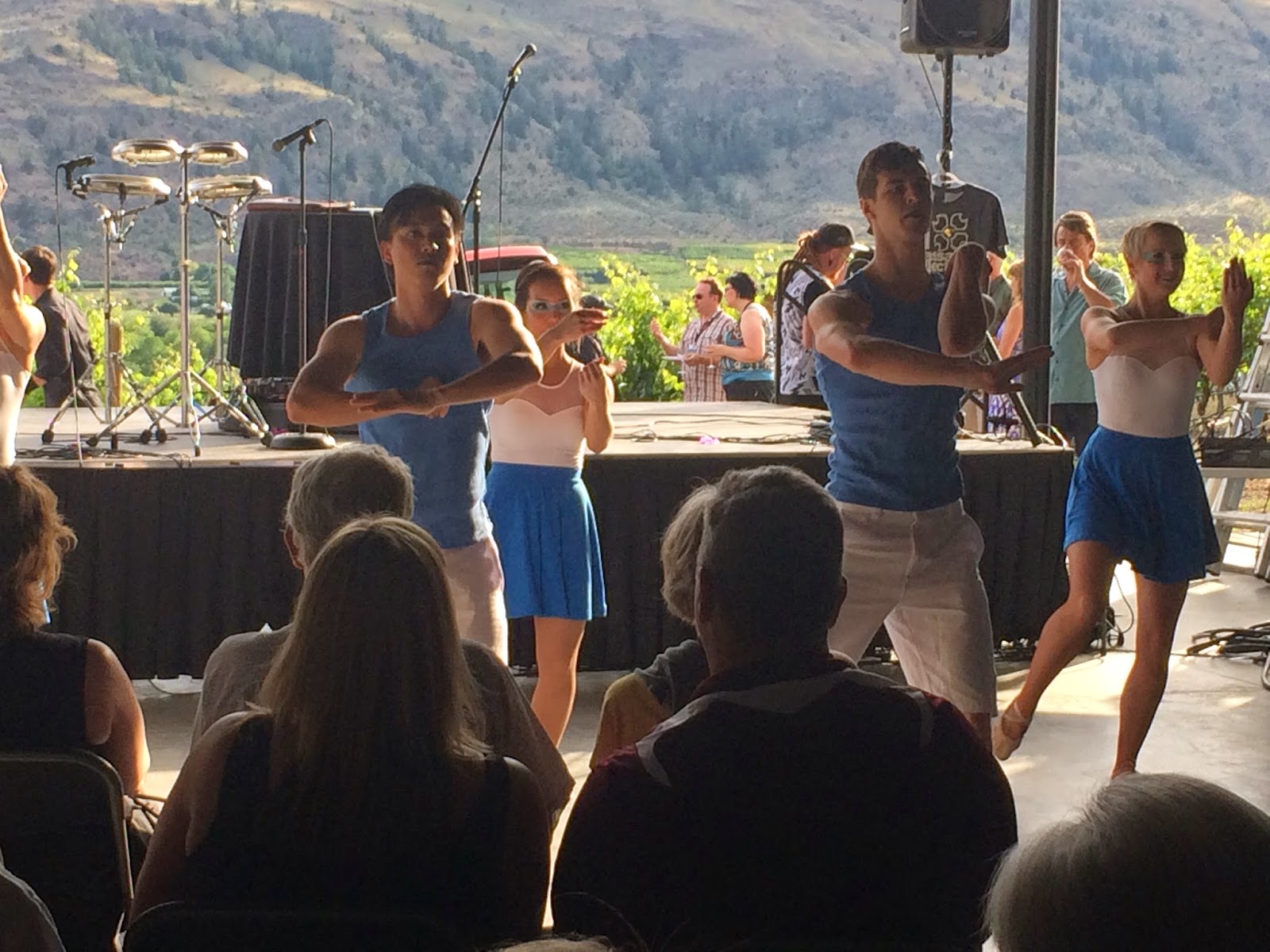 It also features some acrobatics: 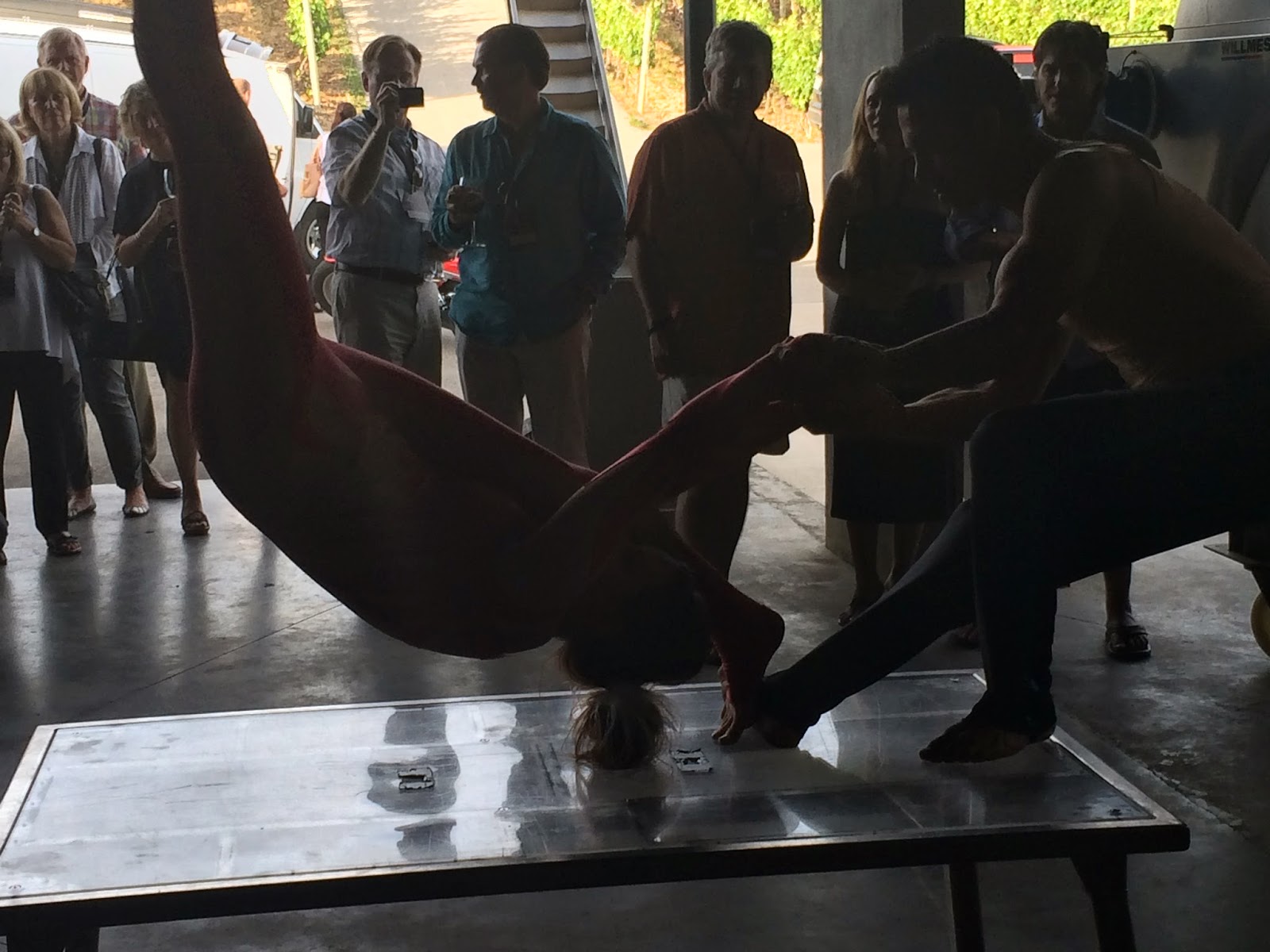 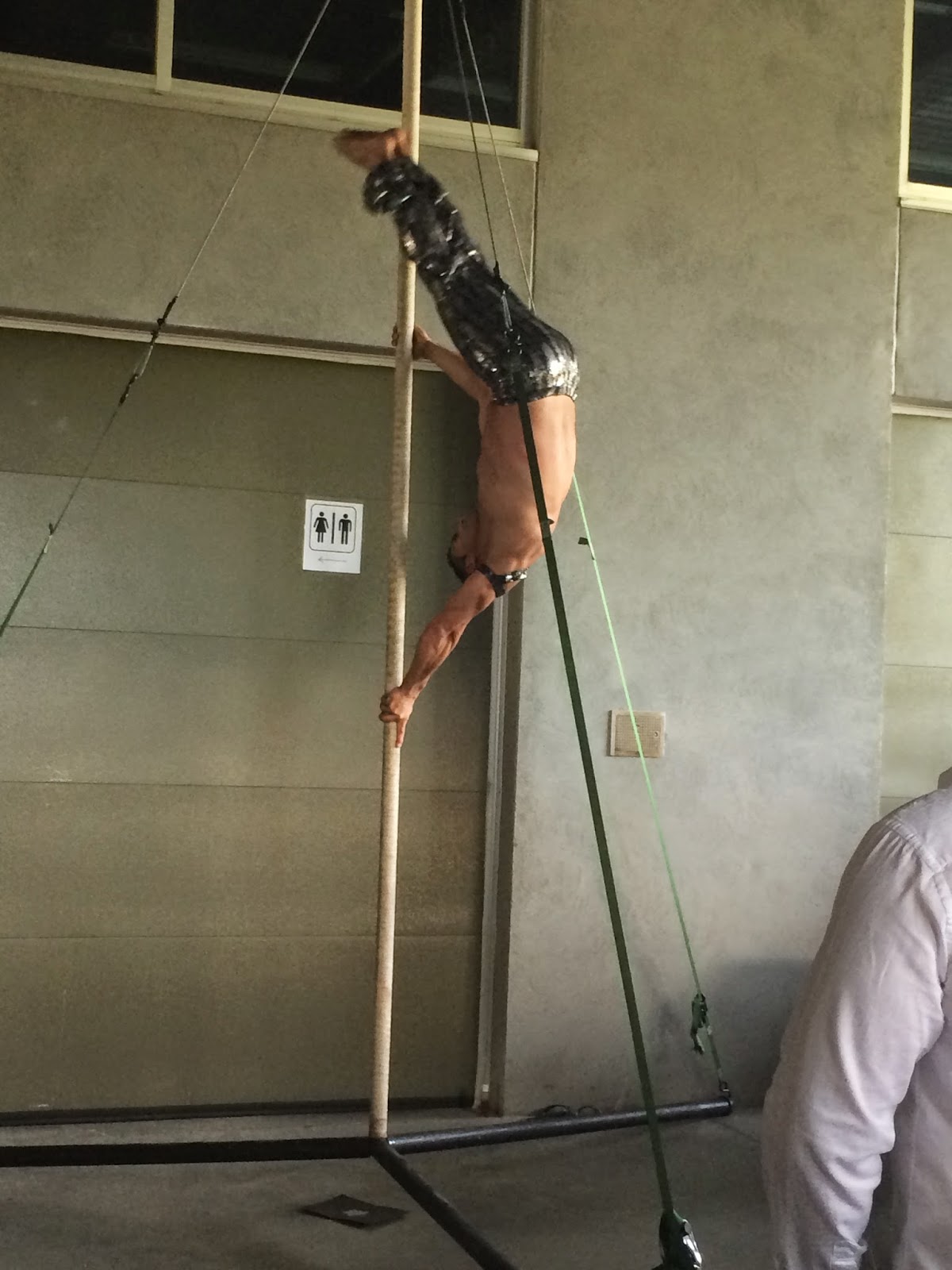 I could do that, you know. I just choose not to.

BTW, Jason couldn't possibly have been nicer or more friendly. You can't see it in the picture, but I was wearing a brace on my right elbow, a remnant from a yoga injury, and he had suffered a similar injury recently "picking up an actress" for a new movie he's doing. Oh, if I had a dollar for every time I'd heard THAT old line......

Everyone knows Jason from 90210 of course, but I told him I was a fan from a wonderful little movie he made with John Hurt in 1997, called Love and Death on Long Island. You have probably never heard of it, but you should check it out.

If there was one problem with an otherwise fabulous evening, it was the "headline" act, a bunch of terrible white rappers called the Wassabi Collective. White rappers not named Eminem have no place at a winery, or anywhere else. But that was a minor complaint and didn't dampen our enthusiasm at all. We ate and drank, met some great people who share our love for great wine, and generally had a blast. Planning to go back next year for sure.

Now, on to the wines!

A few days before we left for the trip, our local VQA store was tasting some random wines, and this was one of them:

Lemons and melons on the nose and palate, joined by flavors of grapefruits and peaches. Crisp with a lingering finish. 85.


And, from our Cabana tasting:

A white Bordeaux blend of Sauvignon Blanc (75%) and Semillon (25%) (same percentages as the 2012). Similar to the 2012 but different at the same time; I get notes of pears and pineapples on the nose and palate. Slightly less citrus, slightly more tropical fruit. Still has that long, lingering finish. Would be a terrific pairing with salads or seafood. 86.

Citrus and pineapple collide on the nose here, with just a hint of flowers intermingling. Nectarines and peaches join in with the party on the palate. Lovely now, but aging for another year or two would certainly pay off. 85.

Rich, full bodied and lovely. Citrus and butterscotch on the nose and palate, joined by pears and a touch of green apple. Palate is soft, juicy, and finishes long. Another white that will age gracefully. Try it in 2016 or 2017. 88.

The only single-varietal in the Okanagan, and our first taste of this one. Violets, white pepper, berries and a touch of cigar box on the nose. Cherries and blackberries on the palate, some spice and earth as well. Soft, ripe tannins. Fabulous now, and a few years of aging will only enhance. Pairs beautifully with just about any meat you can imagine. We got 6 of these with our wine club membership, and we are already half-way done. 92.

We were huge fans of the 2011 vintage, and this one is even better. Can't imagine how good it's going to be after a little time in the bottle.

Their flagship Bordeaux blend, and quite a cult favorite. One of the few you can (if you are lucky enough) vertical taste back to 1999.

This is one that generally needs to age for a long while before coming close to it's full potential. Other vintages that I had tasted young showed potential, but needed time, and lots of it. This one will undoubtedly age gracefully for a decade, but it is showing beautifully already. What a treat!

Merlot dominant (57%) for the first time in years. Black fruits, mocha and chocolate on the nose and palate. The winery describes this as a "more masculine wine than previous vintages". I would concur, and also would describe it as "scrumtrulescent". 94.


There you have it; Oliver/Osoyoos in two days, and a lot of blog posts. Hope you enjoyed reading, and we'll now return you to your regularly scheduled programming.