That bitch Goldilocks must have killed the bears

I've mentioned before how much we love Fairview Cellars' big red blend called The Bear. Their 2009 version was just superb, but good luck finding that anywhere. I have a couple bottles of 2010 in the cellar waiting to hit their peak, and I'm sure they'll be excellent, but 2009 was a special year.

Since there were no Bears around, I picked up the next best thing; a bottle of this: 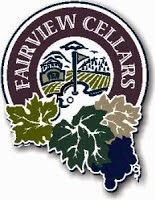 I must confess I have become enamored with Californian wines of this varietal recently; even some of their not-crazy expensive bottles have been excellent, with some very special bottles in the $40 price range from Napa Valley.

This one reminds me a little of those. It doesn't have any of the jammy fruit that you can sometimes find in this varietal from cooler climates. Lots of fruit on the nose, with just a touch of black licorice to add some complexity. A simply fabulous nose. Not surprisingly, the palate can't quite measure up, but that's not to say it's bad; far from it. Lots of fruit, and a very long pleasing finish. Very nice. 88.
Posted by Mean Dean at 6:24 PM