...Merry Christmas to All!
And to all, a wine flight!

Had a lovely dinner here on Xmas Eve with my mom and her common-law husband and put out a few choices for her to pick for wine: 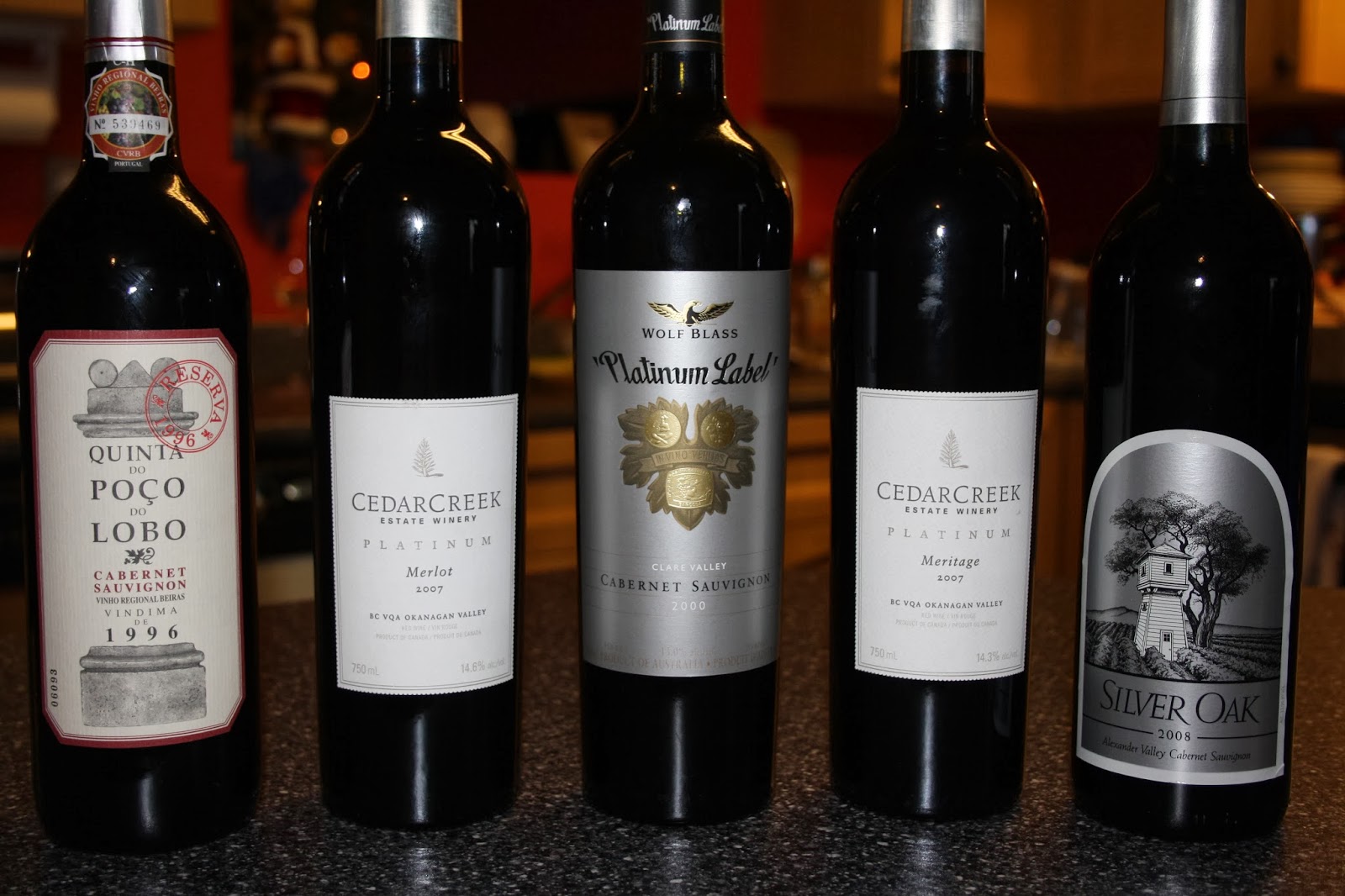 We decided the one on the left, the 1996 Cabernet Sauvignon from Portugal, was too tempting as a curiosity to pass up. I picked this up at a BC Liquor Store just before Xmas for only around $25, so really I wasn't expecting much.

I was right. Undrinkable. Down the sink.

Next we moved onto the most expensive bottle pictured, the one in the middle.

We just bought this one recently, so since it had been sitting on a store shelf since being bottled in 2002, I was half expecting it to be corked (in which case I would return it), or absolutely amazing.

It was neither, unfortunately. It was.....good. Just good. Definitely on the decline but not all the way there, we finished the bottle and enjoyed it, but it was far from transcendent. 83.

Next we moved on to one we've had before at our infamous 5-star wine pairing dinner at Victoria & Albert's in Florida last year.

Beautiful notes of berries and dark chocolate greet the nose and your palate will be pleased with an incredibly silky mouth feel and long, smooth finish. Simply sublime and the tannins are still a bit firm, this wine could age well for another decade or two. 94.

We have two more of these in the cellar, planned to open one every five years to see how they age.


My mom likes Syrah, so we then moved onto one not pictured, 2011 Black Hills Syrah. I've reviewed this one previously, it was terrific as always. We still have three of these in the cellar to further age. They will only get better, and as we are members of the Black Hills wine club, we'll get another half case of their next vintage in September (not to mention a half case of their Nota Bene and Carmenere at different times next year).


That was enough wine for that evening, but on Xmas day we went to my sister-in-law's for dinner, as tradition dictates, and we brought the wine.

First, we opened up a 2009 Summerhill Merlot, which was completely corked. Awful. Down the sink (we just tasted this wine at the winery last summer and it was terrific, so we clearly had a bad bottle).

Luckily we brought a couple bottles, so as dinner was served, we opened up this bad boy:

We had five of these so we figured we'd take one to dinner even though it's still young and would be well served to sit a while longer. It didn't disappoint, having improved even in the last few months since I initially tasted it:

Red fruits dominate the palate, with a smooth and silky finish, belying it's young age. It will only improve with 5-6 more years in the bottle with careful cellaring. Always a favorite Pinot. 92.


Tonight was dinner number three; another turkey dinner, made at home, for my Dad. Paired with tonight's dinner, we reached deeper into the cellar for a this baby:

An interesting comparison between this and the above; this one has aged 5 years, but is not the Reserve version. I actually can't decide which I preferred, so I'm going to give it the same number. Both were fabulous. 92.

For our next selection, we moved to another of our favorite BC wineries:


I previously rated this at the winery:

I gave it an 89, and I was too harsh on it. It's wonderful; a couple more months in the bottle combined with aeration, a bit of time in a decanter have only improved this lovely wine. 91.


Xmas is great, if for nothing else than the amount of wine consumed!!