While I put my notes together for reports on the wines tasted in the tasting room at last weekend's Vancouver International Wine Festival, I figured I might as well do the report on the one must-do-don't-ever-miss-this-and-you-better-pay-attention-as-it-sells-out-in-three-minutes event on the impressive calendar: Dine Italia! Hosted every year at La Terrazza, we have been to this 4 or 5 times. It always takes place on the Saturday afternoon during WineFest, except for the year that Italy was the host country and it was moved to Sunday. We missed that one as we had already made our plans before we knew it was moved from it's regular spot. Hopefully they never do that again, as we would never want to miss this.

And I'm not exaggerating: It sells out in three minutes. Perhaps this is why:


The ONLY downside to this incredible day was the lady sitting next to my wife, who had been to Italy twice in her life and she decided that made her an expert on Italian wine (it did not) and culture (nope), even telling us what we should pack when we go. Oh, and she also proclaimed herself a "very picky" foodie, slamming just about every well-regarded restaurant in Vancouver (including this one, Hawksworth, West, and many others). I was pretty tempted to murder her but I thought that might put a damper on our afternoon.

All the prices listed below are "estimated retail prices" unless otherwise indicated.

I didn't get a picture of the course that we started with, it was brought around to us as we filed in. It was mouthwatering and I could have easily eaten a dozen. I did manage to sneak two of them. Is that wrong?

It was paired with this wine:

Dark purple in colour, with notes of black cherry and blueberry on the nose. Bitter cherry on the palate, with some citrus (lemon) lurking in the background. Perfectly good if this is your thing.

Bland of Garganega and Sauvignon Blanc. Light aromas of hay, almond and citrus. The citrus really punches you in the mouth, and it was a bit much at first, but paired with the salmon, really settled down. Another example of the importance of food and wine pairing.


Pecorino isn't just a cheese...who knew? It's also a grape. And a tasty one. Fragrant aromas of white flowers and pear. Citrus comes through on the palate, joined by some pear and impressive acidity. This was delicious and we were lucky enough to find a couple bottles in the VIWF tasting room liquor store. I almost feel bad for buying a wine this good at this price.

This was the dish of the night, and it was the start of my journey into lamb. I ate more lamb this evening than in my entire life, combined.

Light, dusty aromas of red fruit. Alcohol seems to overwhelm the fruit a bit. Light cherry flavors on a fairly short finish. The least impressive red wine of the night but it did improve with the food. Drinkable if unspectacular.
Mostly Corvina, with some Rondinella and Corvinone. Now we're talking. Earth, cherry, mushroom and floral nose. Cherry, pepper, dried fruit and smoke dominate the palate, with a dusty, long finish. Terrific.

We were fortunate enough to be sitting at the same table as winery owner Pierangelo Tommasi, who was delightful.
This one was originally slated to pair with the next course, but was moved up in the rotation to go with the pasta. I tried it with both, and it paired beautifully with each. Dried red cherries on the nose, with a hint of baking spice. Dark fruit, cinnamon and a touch of vanilla. Finishes so long. What a beauty.

Unfortunately this was only brought in for the WineFest and we couldn't find any; I've reached out to the agent and they have said that the 2011 version is available in BC Liquor Stores, but according to their website there are only 2 bottles in BC and they are both in Kelowna.


This was tasty but was my least favorite of the night. Veal has really never grown on me, I only eat it at events like this. And for once, our neighbor Little Miss Picky was right, the risotto was ever-so-slightly undercooked.

From a site that averages 1 degree cooler than others, creating a more feminine example of Barolo. Light nose of red roses, baking spice and mint. Juicy cherry, raspberry, clove and licorice flavors. It almost seems unfair to rate a Barolo this young, it needs at least 5 years to reach it's peak. The 2011 vintage is available at BC Liquor Stores.

Woodland berries, violets and red roses on the nose. Strawberry, clove, leather, red cherry and rose water on the palate. This one is bigger than the above, and could probably use a decade to get to where it wants to go.

So, apparently I like lamb a helluva lot more than I thought I did. This was incredible. My wife asked for hers to be cooked a bit more than mine, and once that was accomplished, she enjoyed it too. What a treat.

Grapes here are Nero d'Avola, Perricone and a small amount of others. Smoky aromas of blueberry and blackberry with a whiff of tobacco. Dark berries, red cherry jam, black pepper and a hint of licorice. Beautiful, long finish. A keeper. This was my wife's favorite wine of the night, and it was in the lead for me too....until..... 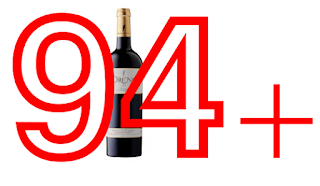 A blend of Merlot (50%), Cabernet Sauvignon (40%) and Petit Verdot (10%). We've enjoyed this one at this event in the past; two years ago, I think. This is readily available in BC Liquor Stores. Aromas of bright red cherry, white pepper, citrus, orange peel and raspberry. Red cherry, sage, pepper and citrus on the palate. A real beauty, and worth the price every day of the week and twice on Sunday. Give it a bit more time if you can and you will be very, very happy.

Aromas of red cherry, vanilla, pepper and baking spice. Jammy, rich and decadent on the palate. Did not go particularly well with the lamb, but instead was a nice accompaniment for the cheese plate coming up.

Oh my. Note to self: Freeze grapes! Delicious. Everything was wonderful, even the crisps which feature two of my least favorite things - cranberries and raisins.

Aromas of ripe, candied fruit, caramel and chocolate. Quite sweet and a long finish, this paired beautifully with both of the cheeses served.

What a fantastic day of food and wine, as always! It pays off to be sitting at my computer refreshing it every 10 seconds until the tickets are available. Until next year....