Great night of food and wine at first time "Theme-ers", and celebrating Portugal!!

Up until now, our "theme nights" had only been hosted by two different couples; that was all about to change as a third couple has joined our fun and they were about to take their first turn as hosts.

They were, to put it mildly, eager to impress....and they went ALL OUT!! Check out the menus and wine scoring cards! 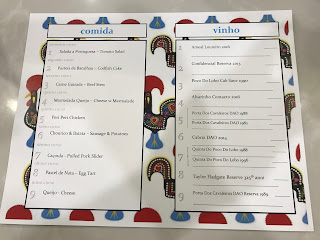 We had joked all week that the food was just going to be catered by Nando's. LOL. Not quite :)

We've had many great theme nights so far, and food and wine pairings have been very important; less so, this time. These were hard dishes and wines to pair. Some worked well, some notsomuch, but individually each dish was very good. A total of nine courses:

Oh, and the wine? This is what we entered to.


So, yeah, if they felt like this was an "audition" to see if we would let them continue to host our theme nights, they were certainly going to make it impossible for us to say "no"!

So let's discuss the wine. I'll give the prices where I know them, or where I could find them. The hosts don't remember the prices of everything at this point either.

Citrus and white flowers on the nose, with a strong, and I mean strong, backbone of minerality and flavors of lemon and lime. Medium finish. This was my first experience with the Loureiro grape, and I'll be intrigued to taste more at the VIWF coming up next week.

Called "Confidencial" because it is an unknown blend of 10 different grapes. Generally I am not a huge fan of wines that are cheap and combine a ton of grapes, but this one is a revelation. Aromatic blackberry, black cherry, plum and coffee on the nose. Medium bodied, with flavors of red cherry, dark chocolate and just a touch of spice. Medium finish. A real treat at this price.


Dark brown in colour. Aromas of cassis, leather, dark chocolate, tobacco and smoke. Dried cherries, cigar box, black fruit and leather on the palate. I would suggest this has peaked and is on it's way down but it was still very drinkable.


"Contacto" refers to the additional time that the wine spent on the skins. Aromas of quince, buttered toast and perfume. Maybe a hint of mint? Pear on the palate, slightly buttery and nutty. My favorite Portugese white to this point, and it has me very excited to taste some more at the Festival next week. This wine was a big hit with the diners.


Yes, that's right, one of the next wines was older than 2 of the guests. I feel so fucking old.

Not to worry, true believers....I took a bottle of each home and will crack them open soon with a big fat steak and review them again.


Decanted for 2 hours. What a steal at this price. One diner described the nose on this wine as "AWESOME". I would agree. Blackberry, black cherry and cassis on the nose. Red cherry flavors, dried raspberry, with layers of spice and earth. Really nice. This was rated as #46 on Wine Spectator's Top 100 Wines of 2016.

Despite the 8 years difference, I found these blends to be almost identical. Aromas of blackberry, black cherry, earth and mushroom. Black fruit and plums on the palate, with a lovely, long finish. I would give the 1988 a half point advantage, but they ended up with the same score.

No trip to Portugal would be complete without a beautiful Port!

There was one more wine served just at the end of the evening, but I'm not going to score it as I only had a little bit and am not sure I would give it a fair number. It's another bottle that I took home, so I will give it a good review when I drink it, and it's almost 30 years old so I will drink it soon!

A fabulous night of food and wine, and it will be nice to have a third couple on board to host from time to time. They did a terrific job from start to finish, and if they were worried that they had to impress us so that we'd allow them to host again, well, they have nothing to worry about!!!

Up next: Last weekend we hosted BURGUNDY night, and I'll do a full report on that sometime this weekend.
Posted by Mean Dean at 6:04 PM