They say a picture paints a thousand words. This is about 50-thousand. 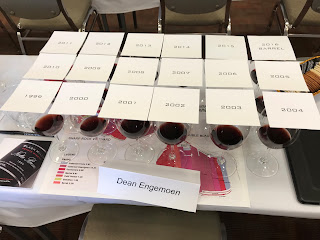 That's right, true believers, a vertical tasting of every year of Nota Bene that ever existed, including a barrel sample of the 2016.

A fantastic event, attended by such wine luminaries as Anthony Gismondi and "The Wine Diva" Deanna Van Mulligan.

I'll sum up my reviews of each vintage succinctly and sort them into three categories:

1999: One of only two vintages (2012 the other) where Merlot is the dominate grape. Tons of leather, tobacco leaf, mushroom, forest floor and black licorice. Still finishes very long, and is tasty, but not a ton of fruit left. 88.

2004: Probably could go in either of the top two categories, but the slippage is just beginning with this one. Chocolate, vanilla and cherry aromas will give you the impression that it's still fresh, but the palate is overcome with earthiness and tobacco. Some fruit left for sure, but there probably won't be for much longer. 90.

2008: Prior to this event, the '08 was the oldest vintage I had tasted and reviewed, here, in 2015. At the time I wondered aloud if it would still improve, and the answer is a resounding "no". It's still very good, but time has started to show some flaws. 90.

2000: Aromas of mocha, black olive and tobacco leaf. Black cherry, cassis and mint on the palate. This one has lots of fruit left but certainly won't improve at this point; drink it now! 92.

2001: Forest floor, mushroom, mint and leather on the nose. Cherry, tobacco and mushroom on the palate, finishes incredibly long. Another one to open up now if you have some! 92.

2003: From the incredibly hot year that featured the devastating fires in the Okanagan, this one was my favorite of the tasting (and my wife's, too!). A smokiness on the nose, for sure, with leather, black cherry, blackberry, mint and tobacco as well. Juicy and delicious flavors of black cherry, plum and boysenberry. Finishes forever. Brilliant. 95.

2005: The lightest aromas of the entire vertical, some chocolate and sage if you pay attention. The palate is so much better than the nose, dominated by black cherry and a touch of spice on the finish. 91.

2006: Like the 2002, this one has become viscious, almost thick, in time. Aromas of cassis liqueur, blackberry, leather, dark chocolate and plum. Blackberry and blueberry show up on the palate, which is delicious despite the unusual qualities. Long finish. 92.

2007: Aromas of cassic, black raspberry, mint and stewed prunes. Black cherry, plum, vanilla, toasted oak and cedar on the palate. This one, at a decade old, is hitting it's peak but has more time in it. 92.

2013: Brilliant aromas of cherry cola, blackberry and red cherry. Strawberry, raspberry, vanilla and white chocolate on the palate. Lovely, long finish. Hey, another couple years in the bottle will probably improve it even further, but it's drinking so well now! 93-95.

2015: What? The most current vintage ready already? Yes it is! The most approachable vintage yet. I'm just going to link to my review of this from June where I gave it 95 points, because nothing has changed. Delicious!

2009: I wouldn't wait too long on this one, but it still has closed off tendencies. The nose is light and unimpressive, with sage and chocolate lurking in the background. Bright cherry, raspberry, strawberry and blueberry flavors. Finish is medium at best. 88-90.

2010: This one could probably go in the above category as well, it's "right there".....aromas of cassis, eucalyptus, cherry cola and black tea. Black fruits dominate the palate, with a lovely mouthfeel and long finish. Give it another year, maybe two, and you will not be sorry. 93.

2011: Another one with a light nose that seems closed off and unimpressive. The palate is a little hot, with flavors of red cherry and red raspberry. I'd give this one another 3-4 years and see what it is like when it hits the decade mark. 88-90.

2012: The second Merlot-dominate vintage features aromas of cherry cola, vanilla and mocha. Lots of red fruit up front on the palate, joined by some blackberry. Finishes long. This one is almost ready to go. Open before the 2011 for sure. 92-94.

2014: Light aromas of red cherry and herbs. Cherry and blackberry dominate the palate. This was really popular with a lot of the other tasters but I think it needs another 5-7 years to open up and reveal itself. 91-93.

2016: Well, duh....this was just a barrel sample, but it was already showing well. Black cherry and black tea aromas, with cherry and blackberry flavors. Rich, full mouthfeel. Tons of potential! 92-94.


At the conclusion of the event, we were asked to secretly pick our favorite. As I mentioned, my wife and I both (without knowing the other pick) chose the 2003 in what would have been a close call over the 2015. It was the 2015 that came out on top of the room-wide voting, however. Clearly this group of tasters preferred young, fresh wine, because the 2nd choice was a huge surprise to me.

So that's it for this Okanagan trip! Next up, I still have to report on our last theme event (Chile!), have lots of great Holiday wine to report on and, a new annual feature, I'm going to spotlight my Top 10 Wines of 2017! Stay tuned!!
Posted by Mean Dean at 9:07 AM