Holy crap, it's four days until Xmas. It was October, like, yesterday. Sorry for the total lack of blog posts lately, things have been insane. But let's pick up the Okanagan Trip at a new (to us) winery. Started in part by Jesse Harnden, who was instrumental in the startup at The Hatch (aka Crazytown). We met Jesse at The Hatch on our first visit, only three weeks after they opened. He left to pursue other opportunities, which I guess came about when Rustico Farm & Cellars hit the market.

He and his partners renamed the winery "Rust Wine Co". I guess it was just cheaper to use some white out on the "ICO". Perhaps it's a little more involved than that.... 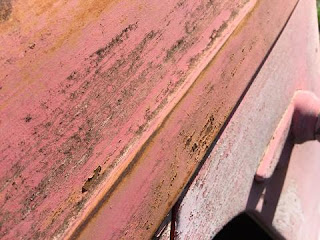 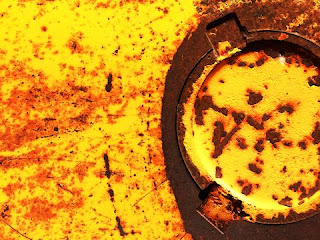 THERE WERE SEVERAL REASONS WHY WE WERE DRAWN TO THIS ADMITTEDLY UNCONVENTIONAL IMAGE. THE EVOLUTION OF RUST IS UNSCRIPTED.  ITS COLOURS EMERGE FROM THE TOUCH OF NATURE AND BLEND INTO ENTIRELY UNPREDICTABLE FORMATIONS.  RUST THEREFORE SERVES AS A PERFECT METAPHOR FOR WINE.   WHILE PEOPLE CAN NUDGE THE PROCESS ALONG ITS WAY, THE FINAL PRODUCT IS DETERMINED BY THE LIFE OF THE VINES, THE DEVELOPMENT OF THE VINTAGE, AND THE MOMENT OR MEMORIES OF ITS ENJOYMENT.  ONE OF THE MOST WONDERFUL CHARACTERISTICS OF WINE – WHICH IT SHARES WITH RUST - IS THAT IT IS TRULY ALIVE, EVOLVING AND TIMELESS.

Makes sense. I guess. Anyway, it's a little bit "out there", but what would you expect from someone who was involved in the launching of The Hatch?

Kind of a middle-of-the-road Riesling, with a bit of everything. Some minerality, off-dry but not sweet, soft, supple and round. Flavors of banana and pineapple. Terrific to just sit and sip.

Putting your nose into this glass is akin to opening up a fruit cup and burying your head in the jar. Pear dominates the juicy palate. Very nice.

There is no mention of this on their website, so it's probably sold out. Sourced from an abandoned vineyard in OK Falls. Another fruit cup on the nose, with pear and nectarine really standing out. The palate features racy acidity and lots of lemon. This is not a patio sipper, you'll need to find the right meal to pair with this one.


Made from 100% Zweigelt and if you've ever smelled Zweigelt, that won't be a surprise to you. Tart strawberry and rhubarb aromas and flavors. Quite dry.

Voluptuous aromas of strawberry with some herbaceous notes lingering. Red cherry, strawberry, fresh sage flavors abound. Give this one a couple years to fully flesh out and let the flavors integrate. Lots of potential.


You think you know Zin? You don't know THIS Zin. NOTHING like the big jammy Zinfandels you might be used to. Aromas of white pepper, blackberry and pencil shavings. Savory on the palate, with herbs and black pepper dominating, but not overpowering, the fruit. We decided this would be a terrific pairing with a Rosemary-crusted Prime Rib, and a couple of weeks ago I put that to the test. We were right. OH, so right. Absolutely delicious.


Well that's it for this entry, we left here satisfied with a bottle of Riesling and a couple bottles of that incredible Zin. Very friendly service and a nice space. Check this one out next time you are in the area!

Next up: Oh so much to still report on. Still have to report on our "Chile" night which was wonderful, and there are three more entries in this Okanagan Trip to come, including the main event of the trip. I'll try to get them all done before the New Year. And let's face it, I'm going to be drinking some great wine over the Holidays so that will be another report!
Posted by Mean Dean at 9:04 AM