If you don't know what a neuftet is, you should go and watch A Mighty Wind right now. Go ahead, I'll wait.

You're back! Funny, right? OK then, let's get to the wine.

Early in our trip during our visit to Black Hills (that report is still to come), our host, Wayne, highly recommended we go seek out this place I had barely heard of, Vin Amité Cellars. Wayne knows his stuff, so his recommendation carries some weight, but we already had a pretty full docket of wineries lined up, so we put them on the back burner and they were a "if we have time" choice.

The next day, at Cassini, our lovely hostess recommended the same thing. YOU HAVE TO GO TO VIN AMITE!!

Well, OK then. Two random recommendations is enough to push them to "make time for them" status, and that's what we did.

They are located up near the North end of Oliver, and we had driven by a few times but didn't know anything about them. They have a quaint little tasting room, pleasant but unremarkable. But we were not going to have to wait long to find "remarkable".

This winery was opened in 2015 under the name VinPerdu, but changed last year to VinAmité, perhaps due to a conflict with a Calfornia Red Blend called Vin Perdu.

Family owned and operated, we spent most of our tasting in the company of Catherine Coulombe, one of the daughters. She could not have been more pleasant, more knowledgeable, or more passionate. It shows in the wine.

Muted aromas of lemon and pineapple. The flavors aren't muted, with some green apple jumping into the mix. Different than your average PG, almost unctious, with just a touch of oak on the finish. 88. 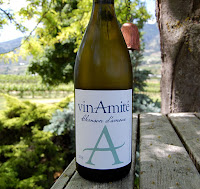 A unique blend of Chardonnay, Pinot Gris, Gewuztraminer and Orange Muscat. Putting your nose into the glass is reminiscent of opening up one of those fruit cups that Mom used to put into your school lunch. Some aromas of hay and baking spice make an appearance as well. Flavors of stone fruit, particularly peach, and lychee, with a touch of minerality. Patio sipper extraordinare. 89.

Lightly oaked but no maloactic fermentation. Light notes of buttered toast and hazelnut on the nose and palate. Tropical fruit and vanilla flavors as well. Very well balanced and lovely. 89.

Now, as for the actual reason we are here....we got to talking about Gamay Noir while at Black Hills for some reason (odd since they don't make a Gamay), and that was what prompted Wayne to push us to come here. Gamay is SO not our thing, it may be the only varietal that we have never really enjoyed, anywhere. That was about to change.

Intense nose of red cherry and red berries. Juicy red berry pie dominates the palate. Seems to avoid all the clichés of this varietal. Tasty. 88.

This one seemed to actually exhibit some more aged characteristics than it's older brother. Lots of red fruit prevalent, for sure, but some leather and earthy notes as well. Seemed to be a touch more complex, but also delicious and approachable. 89.

Had the tasting ended right there, I suspect we may have left with our first ever bottles of Gamay! But it was about to go up a notch or seven. 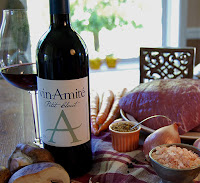 Enticing aromas of plum, red cherry, vanilla and cedar greet the nose. The cedar really comes through at the end if you give it a good swirl and let it develop. Blueberry, cherry, strawberry and a hint of earthy goodness on the palate. 90.

Beautiful aromas of blueberry jam, spice, mint, charred meats, vanilla and cassis. The palate is juicy and meaty at the same time, with notes of black fruit and white pepper. Long, lovely finish. 91.

What a stunning difference changing the percentages (and leaving out the CS) makes here. Red berries, especially strawberry, dominate the nose, but if you wait for it, red roses show up as well. The red fruit continues through to the palate, where it is joined by notes of milk chocolate and vanilla. Absolutely delicious. 93. 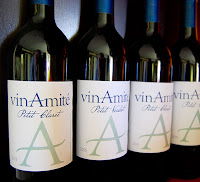 Intoxicating aromas of black licorice, wet stone, crushed violets and black plums. A hint of spice, tobacco and earth join in with rich, luscious blackberry flavors. The best single-varietal Petit Verdot I have ever tasted, and it's not really even that close. Limited to 73 cases, and if money were no object, I might've damn well bought them all! 93.

So there you have it, our first trip to Vin Amité will certainly not be our last. Next time I think we'll plan on staying longer and enjoying some cheese and charcuterie along with the wines. I cannot recommend them enough, I know they are a bit North of the beaten path, but it's worth it to keep heading up Hwy-97 a couple miles to find them.

Next up: Getting into the home stretch of the trip, tasting the new stuff at Le Vieux Pin!
Posted by Mean Dean at 11:58 AM