Put a shrimp on the barbie and maybe the Dingo drank your wine...

....let's see how many Aussies we can offend with stupid Australian clichés.....

It's Australia night! Our friends' turn to host our monthly (thereabouts) theme and wine nights, and they really went over the top tonight. Shortly after our arrival we were told there were two dishes that they were not going to tell us what was in them until we had eaten it. But those are up later, let's start from the beginning.

And they really DID put shrimp on the barbie!

We had a lot of great food tonight, but this might have been my favorite thing of the night. They made the same sauce on chicken for my allergic wife. Delicious.

The wine: They actually made a mistake and switched the pairings on the first two dishes but it didn't seem to matter much. The pairings were still very good! 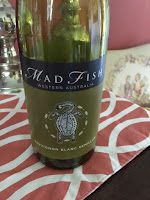 Intense aromas of lemon, lime and fresh cut grass. Citrus flavors dominate the palate, with a lovely finish and nice mouth feel. Very nice and a good pair with the prawns. 89.

Another delicious dish, and it was cooked absolutely perfectly. Soufflé is no easy dish to cook! 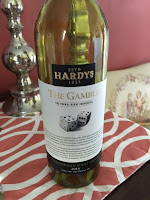 Aromas of stone fruit, melon and tropical fruit. Creamy mouthfeel but the flavors fell a bit short with light notes of citrus. This didn't add anything to the food and, in fact, was dwarfed by it. 85.

Yes, this was the first of the two that we weren't told about, but I think we guessed it fairly quickly. The crocodile was delicious (cooked like fish and chips in a batter), tasting a bit like chicken but having a full, thick texture like a big cut of pork. 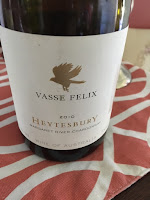 Wow, what a treat. Aromas of hay, grass, hazelnut and flint. Peach and nectarine notes on the palate, with a touch of nuttiness and creaminess. The only downside was a very short finish which kept this wine from true greatness. I liked this wine very much, but I really wanted to love it. 92.

Alpha Box & Dice 2014 Kit & Kaboodle, previously reviewed here. No change of my opinion of the wine, which paired beautifully with the meat pie.

Yup, the second dish we had to guess, and I think we also got this one pretty quickly. It was really good, but....but.....sigh. I was a bit concerned about how I would react to this.

So I should probably explain a bit about me...I am an animal lover. I actually like animals a helluva lot more than I like humans. If anyone ever tried to hurt one of my cats (our "kids" as my wife and I refer to them), I would slit their throat and piss into the hole and have absolutely no qualms about doing it.

BUT.......I love meat. Love it. And I'm a long way away from trying to pair a nicely aged California Cabernet Sauvignon with a Tofu burger. So as long as I'm into wine, I'm pretty sure I'm going to keep eating meat. So in principal, I'm a vegan. In reality, I'm about as far from it as you can get. We do try to buy meat that we know has been raised ethically but that is generally easier said than done.

Here is how I justify it: we eat meat that has been bred specifically to feed humans. Cows, pigs, chickens...if the human race stopped eating meat tomorrow, farmers would stop breeding them, so they would cease to exist (not ALL of them, there would still be some in the wild of course). So, while it's very important that all animals are treated and killed in an ethical manner, I'm not sure it's hypocritical to love animals and still eat meat. Many disagree with me, I get that, but that is where I am.

Crocodile wasn't much of a problem. Even though they don't really meet my normal criteria, let's face it, that Croc would have eaten me if he could, so I'm fine with turning the tables.

So that brings us to kangaroo. Yes, I know, ask any Aussie about kangaroos and they will tell you that they are mean, and they are a huge pain in an ass. I get that. But to me, kangaroos are this: 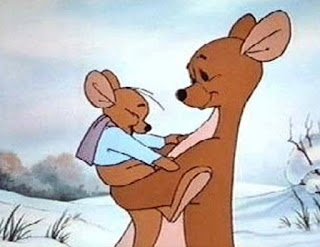 So.....although I really enjoyed the taste of this, it was tough to eat and I had trouble finishing the dish. Not sure I ever want to try this one again. I'm trying to forget about just how good it actually tasted. 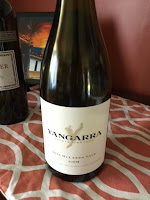 Holy shit, this was incredible. I took a couple of these home and devoured them the next day. Delicious.

So there you have it, our latest 'theme night' was an unqualified success, and I'll have to really raise my game in early July when we reconvene for the next one.

I will have a decent chance to do so, however, as our next theme night is BORDEAUX!!

It was originally going to be "France" but there is just too much amazing food and wine in France, so I'm splitting it up and featuring the most famous wine region in the world all by itself.

I have a few months to learn to cook French food. Time to Google "Julia Child"!!

Next up in the wine blog, a ton of good stuff we have enjoyed in the past few weeks, and we are exactly ONE WEEK away from our next trip to the Okanagan!