A taste of South Africa, without the heat !!

Our monthly "theme night" took place this past weekend and as always, it featured good company, good wine, and good food. I was totally unfamiliar with South African cuisine before this and it took quite a bit of research to find good recipes (especially ones without curry, which we don't like). But find them, I did. Links to all the recipes are below.

There isn't a lot on this salad that I like, but my wife and guests were bigger fans than I. The simple 3-ingredient dressing was simple to prepare and delicious.

Flavors and aromas of citrus, grass and tropical fruit. Light on the nose and the palate, well balanced acidity. Paired nicely with the salad but a bit underwhelming. 86.


Wow. Not only was this the dish of the night, by a country mile, it might be the best thing I've cooked, EVER. Absolutely fantastic. My wife, who is allergic, thoroughly enjoyed hers as well, which featured chicken medallions standing in for the Scallops. I didn't even put any truffle oil in, but that would give it a further kick. I will be making this again for sure.

Light notes of butterscotch, citrus and hazelnut. Hints of toasted almond, with lime, orange and butterscotch on the palate. Lovely but a bit less spectacular than previous vintages. Perfect pairing with the scallops. 89.


These were beautifully spiced and really delicious. It's a recipe I will make again and again anytime I'm looking for this type of potato dish.

Previously reviewed and my opinion did not change.

Rustenberg 2009 Five Soldiers Chardonnay ($59.99)
Aged 18 months in oak and undergoing 100% maloactic fermentation, I was surprised at the subtlety of the buttery notes on the nose and palate. Dominated by citrus, peach and melon aromas and flavors. Creamy and long finish. 90.

Really simple, really unusual and really tasty. This version of South African "relish" can pair with any protein. We ate it on it's own in order to really get a sense of it and it was well received. 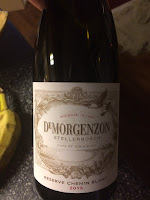 We left out any curry powder from any recipe as we despise curry. This very traditional South African dish was terrific and quite different than what we know as meatloaf. I HATED the rice, but others enjoyed it. 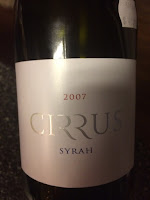 Lovely notes of earth, mushroom and red cherry. The palate features cherry, earth, a touch of spice with chewy tannins and a long finish. Really coming into it's own after a decade. So good and a nice pair with the Bobotie. 92.

Another very traditional South African dish which I would describe as a thick stew. In the video, Siba makes this dish with lamb necks but since I don't like lamb and have no idea where I'd find lamb necks, I subsitituted Oxtail (which Siba mentions was how her mother made it). I'd never worked with Oxtail before, and it was difficult to get off the bone; but it did flavor the dish nicely. This was interesting and I'm glad I tried it, but doubt we'll make it again. 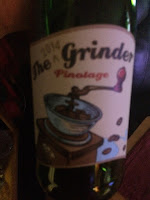 Notes of violets and dark chocolate on the nose. The palate is very chocolaty, with just a touch of spice. 87.

The main event of the evening and although it was seasoned very nicely and cooked perfectly, the meat was so tough it was virtually inedible. I would make this again but use a much better cut of meat than the rump steak that was suggested in this recipe.

Intense notes of black licorice mingles with baking spices. The licorice sticks around on the palate, with toasty oak flavors and a very long finish. This was really spectacular and probably would have paired beautifully with the steak had it been edible!!! 94.


So that's it for South Africa night, which I think was a huge success. Some really interesting recipes and we have a few more good recipes to try next time that this country rolls around.

Next up for theme nights is (I believe Australia). Next up for the wine blog is a report on a weekend trip to the Okanagan that we are taking in about 6 hours.