Okanagan Trip, Part I: it's like trying to find good wine in a haystack.....of Little Straw.....

A few weeks ago we received an invitation to a special event for members of Quails' Gate's Barrel Club. And oh, what an event it was. More on that in a later post.

For now, our first visit to a little winery called Little Straw. I knew almost nothing about them but I noticed on their website they had a little bistro, which was exactly what we were looking for to have a quick lunch before the event, which started at 4. The chef (who is also the assistant winemaker and also acted as our waiter!) was terrific, and although the menu was small, there were some nice choices of what he described as "Spanish Tapas". We ended up with the "Chef's choice", basically a little bit of everything. 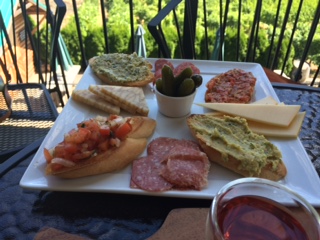 Everything was good, but take particular note of the cheese on the left of the plate. It's a maple cheddar. Yes, maple. OH MY.

As we were leaving the Okanagan, we stumbled into a fresh fruit and vegetable stand that just happened to sell this cheese, so we bought a couple of blocks. We'll be serving it at our upcoming tasting events, for sure. It's different and delicious.

In addition to the lunch, we ordered flights of their wine....we figured even though we would be paying for wine we could taste in the tasting room downstairs for nothing (well, they accept donations), it would be a more pleasant experience to taste it with food.

Unfortunately, the wine was served in very small cups, making it impossible to swirl the wine (without spilling it everywhere, and I speak from experience here) and also quite difficult to properly smell it. I'd recommend to them to serve their flights in actual wine glasses, or something close, as they are really just muting the fragrance and flavors of their own product. Anyway, we tasted through what they have, and my notes are below.


Muted nose of citrus with a touch of honey. The palate features lots of apple - both red and green - and a little bit of peach. 86.

Notes of gooseberry, guava and a touch of fresh grass on the nose. Citrus dominates the palate, which also features a but of honeydew melon and red apple lingering in the finish. 87.

Their signature white blend of Riesling, Auxerrois, Gewurztraminer, Siegerrebe, and Schonberger. Some lychee, pear and citrus notes on the nose, followed by flavors of granny smith apple and lychee. Slightly off dry. There is a lot going on here. Maybe too much. 86.

Interesting aromas of green apple, citrus and cloves. The palate is green apple dominant, with a bit of clove mingling around the minerality. This showed some potential for growth. 87.

Lovely nose dominated by red fruit, particularly strawberry. The strawberry carries right through to the palate, with some cherry joining in and just a touch of spice on the finish. This was, by far, our favorite wine of the day. Lovely. 89. 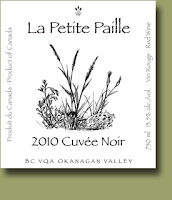 Here's a blend I bet you haven't seen before. Pinot Noir, Merlot, Syrah, Cabernet Franc and Blaufrankish.
Blackberry, blueberry and a smidgen of vanilla on the nose. Very light palate of dark fruit. 86.

Merlot, Cabernet Franc and Cabernet Sauvignon grown elsewhere, mixed with some of their estate grapes.

Dark fruits dominate the nose, with some mint, vanilla and spice hanging around. The palate is light with a chalky mouthfeel, dominated by dark berries, oak and baking spices. 86.

Intense nose of blueberry and blackberry with some smokiness. Blueberry is in charge of the palate here, with some earthy undertones. Anyone who reads this blog probably knows our opinion on Foch, but hey, this one is as good as most. 86.


After lunch we headed down to the tasting room (which was COMPLETELY empty when we walked in) to find that World War III had broken out. Turns out a tour group had arrived (and this tour group would be the bane of our existence for most of the day) We tried to get close enough to taste the 3 or 4 other wines they offered, but none of those were opened, so we had already tasted everything we were destined to taste....so on to our next stop.

Next visit, we will taste the wines in the wine shop to ensure we are giving them a fair shake. We will definitely be heading back to the lovely bistro.

Next up: another small winery that usually over-delivers, Mt. Boucherie!!