Getting excited for our latest foray into wine tasting in the Okanagan, which comes in less than two weeks; for now, here are some reviews of what has been in our glasses in the recent past. As always, prices listed below are estimates...with the new rules in BC Liquor Stores, I can't keep track.

I was particularly good today, so my reward as I type this is a 9 year aged Riesling from Australia.

Strong aromas of tropical fruit, green apple and slate hit the nose. The flavors follow through on the palate and this excellent example of a dry Riesling finishes long and has very well balanced acidity. Drinking beautifully now. 90.

This is apparently the "week of D'Arenberg" as we had two bottles of wine from this top Aussie winery last night.

And the theme continues, as we opened this one up a couple of weeks ago:

Notes of red fruits and lots of pepper on the nose. An earthy touch as well, which gets more prevalent as it opens. Fruity with some spice on the finish. Acidity is balanced and lively. Probably would have improved with some more aging but was very good now as well. 89.


That's just about it for Australia for now, let's come home to some good BC wine, from one of our favorite wineries, Cedarcreek. We are members of their Platinum Club for a reason. Their Estate level wines are very good and very reasonably priced. Their Platinum wines, while not as cheap, are of excellent quality. And their customer service is off the charts. Oh, and they offer free shipping to their wine club members, which is (I believe) unique to them.

Some notes of pineapple and citrus on the nose. The pineapple disappears on the palate, leaving behind lots of citrus flavors with just the slightest hint of oak. Very good at this price point. 87.

Plums, anise, and a touch of mint on the nose. The mint comes from the Cabernets that are mixed in: 7% Franc, 2% Sauv. Blackberries and plums on the palate. Lovely, another example of a wine that over delivers for the price. 88.

Apples and citrus on the nose. Very little oak. Fruity and full on the palate, with a touch of nuttiness. Lovely. 89. 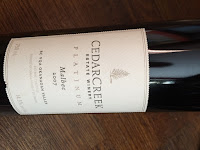 So, I've been told that this originally sold at the winery for around $50. About a year ago, I wandered into the "Liquor Depot" in town and noticed that while most of their wine was crap (Hochtaler, Yellow Tail and Apothic front and centre), they had a couple of interesting aged bottles. One of them was the 2009 Quails' Gate Chardonnay which I bought about a billion of, and have reviewed previously. The other one was this one....which they were selling for $89.99. A bit rich for my blood given that I had no reason to think I'd like it, not being a big Malbec fan. But I was intrigued......

.....Intrigued enough to keep checking it out every time I was in the store. And my intrigue turned to excitement when, about a month ago, they dropped the price to $34.99!! CHA-CHING. I immediately bought a bottle, and Emailed the winery to get some details on it, since it wasn't even listed on their website.

The first Email I got back from their concierge was something along the lines of " OH MY GOD WHERE DID YOU FIND THAT? GO BUY IT ALL! BUY IT ALL!".

I'm paraphrasing, but only a bit. She was pretty excited to hear there was any of this left, as it had been long sold out at the winery. They only make a Platinum Malbec in very special years; in fact, only in 2007 and 2009 to this point, and their winemaker, Darryl Brooker, told me that although they were both good, the 2007 was the best of the two and was drinking  perfectly now. Well, OK then, we cracked it open and it was quite spectacular.

Aromas of lavender, spice and violets greet your nose, followed by black cherry, dark chocolate and a touch of spice. The finish is long, and long, and long, and it's still going. My favorite Malbec from any country, by a country mile. We went back and bought the last two bottles and I am just about to start enjoying one right now. 93.

If you have never read my story on our evening at Cedarcreek in late 2013, including tasting the two different Pinots from the same year, same winery, but 100 yards apart, go here to read it first.

The 2012 version, we assume, will be the same. We haven't tried the Block 2 one as of yet, but we opened up the Block 4 earlier this week and it was what we expected, similar to the 2011 vintage: masculine, earthy, and lovely, but honestly we probably cracked it a bit early. This one needs more time in the bottle to fully develop and round itself out. For now, 88. I expect I'll re-review this one next year, and beyond, as we have a few more of them aging.

Jam one strawberry up each nostril, and you'll understand this wine. It's freaking lovely. Some cherries come to join the party on your palate. I don't like rosé. Really, I don't. OK I do now. 89.


Now let's cross the bridge into West Kelowna to another one of our very favorite BC wineries:

Roses, blackberry and blueberry on the nose. The fruit shines through on the palate, joined by a touch of spice and smoke. Can be enjoyed on it's own but definitely improves with food; try it with a big juicy steak. 88.


One of the special wines produced for the winery's 25th Anniversary Series. Blackberries dominate the nose, with a hint of coffee and spice. Just a touch of cigar box on the finish. Nice, but we opened this one too early; I am looking forward to trying it again at a later date. 88


Not yet sick of wineries who's wine clubs we belong to? Good, because here is another. This one is consistently producing wines of high quality, probably under-priced by about $5/bottle. Just don't tell them that.

2010 was a "lousy" year for BC wines, but notsomuch for Pinot Noir, which thrives in cooler climates. Expect some plums, currants and cherries on the nose. Just a hint of sage joins in. A bit of toasty oak on the otherwise fruity palate, with just a bit of earth. 88.

Beautiful nose of black fruits and spice. Fruit and spice dominate the palate and this one finishes long and lovely. 90.


Enough of BC for now, let's check out an old favorite from Germany: 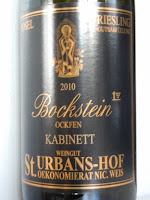 In the "old days" we loved sweeter Rieslings; since our tastes have changed and we have begun to appreciate much drier Rieslings, would we still love this one? Oh yes. Oh yes.

Lots of honey, pineapple and tropical fruit on the nose and palate. Almost "sweet", but in a lovely way. Diesel aromas just starting to develop. It's just so good on it's own and would pair beautifully with any Asian dishes or spice. 93.

Oh, and before we go, let's head to Argentina for a moment. We were invited to a cabin last weekend where one of the other guests brought us this little beauty: 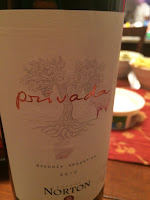 A blend of Malbec, Merlot and Cabernet Sauvignon.

Lots of ripe fruits, plums and mint on the nose with a touch of smoke. A hint of coffee mixes with the fruit on the palate. The Merlot adds some smoothness. A real nice example of an Argentinian blend that won't break your budget. 88.


There we have it, for the first time since, well, just about forever, I am almost caught up. That will change in about two weeks when we hit the Okanagan and have about a billion more wines to report on. And it will change again in early July when we are going to tour some of the Fraser Valley wineries. So much wine....so little time. Oh well!