A dinner party with some SERIOUS wine!

Apologies for the lack of updates lately, lots of other stuff going on. I'll try to get the blog updated more frequently!


Had some friends over for dinner on Saturday for a 5-course meal complete with appropriate wine pairings. First course was Caesar salad paired with:

Course 2 was intended to be Brown Butter Risotto with Lobster....but when I opened up the lobster (that I had bought just the day before) it had a rather foul odour, so I wasn't going to take a chance on killing everyone at dinner (except for my wife who doesn't eat seafood...but she would have had quite a mess to clean up!), so I substituted some tiger prawns for the lobster. It worked just fine. Paired with:

Rich and creamy, with tasty notes of pineapple and coconut intermingling with butterscotch and citrus. An absolute steal at this price. 93.

Next up a recipe I had never made before, Stuffed Butternut Squash. Intriguing and this was the suggested pairing:

Dark ruby/purple in colour. Blackberry jam and black currants on the nose and palate. Jammy but not overly so. A touch of chocolate on the finish. Lovely. My favorite Zin to this point. 91.

We took a small break to rest our stomachs before continuing, and while we took a break from food, we did not take one from wine! We opened up our last bottle of a wine we will never see again: 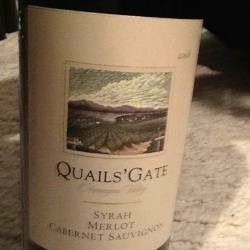 A wine I had never heard of until we received one in our latest Club shipment. After tasting it, I ordered the last few bottles from the wine shop. I've never seen this anywhere, not even on the menu at their restaurant, Old Vines, which is where their library wines reside. It's a lovely wine, with berries front and centre accompanied by just a touch of pepper and mint to round it out. I'm going to miss this one. 90.

And, for the main event of the evening, pairing with Filet Mignon in a Mixed Berry Demi glaze:

50% Merlot, 24% Cabernet Sauvignon, 21% Cabernet Franc and 5% Petit Verdot. Dark fruits, violets and a touch of smoke on the nose. Raspberry, chocolate, cassis and spice come together on the palate. Seemingly endless finish. A real triumph of winemaking. It's amazing now, but probably has another 5-6 years in it. 95.

And just in case that wasn't enough great wine for one evening, paired with dessert of No-Bake Pineapple Cheesecake, the (still) only 100-point wine I've ever tasted:

A terrific night of food and wine, and great friends. It doesn't get much better than that! 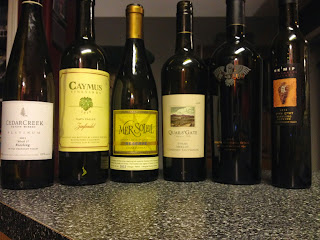