Regular readers will recognize the name "Mondavi" from other blog posts, including my post on Opus One, but not every Mondavi is equal. We arrived at our semi-private tour/tasting and were able to taste quite a few of their offerings.

Our "welcome" wine was given to us early in tour....keep in mind it was about 1.8 million degrees out (with the humidity) so it was probably not quite as cool as it should have been.

Some of us would know this as "White Meritage" or "White Bordeaux". A blend of 90% Sauvignon Blanc and 10% Semillon. Grassy notes intertwined with some peach and lime. Well balanced acidity. Finishes long. 86.\ 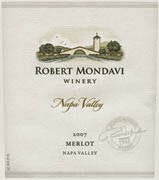 Notes of blueberries and vanilla on the nose. This is a strange one; already 7 years old but seems closed off. Our tour guide suggested this could age for another 30 years, which is unheard of in a Napa Valley Merlot. I think he may be right, or at least close. 88.

Strong notes of blackberry on the nose. The palate gives way to black cherry, cola and tobacco. Absolutely beautiful now and a few more years in the bottle will only make it better. 94.

Juicy and fruity notes with cherry and blackberry notes. Finishes long and lingering. Aging would inhance. 88.

At the end of our tour, we attempted to buy a couple bottles of the '07 Merlot for aging, only to find out that the area we were tasting in was out of them! They had some in the wine store but that was closed and wouldn't open until the morning. As an apology, they gave us (yes GAVE US) a bottle of this:

Peach, lychee and a touch of honey on the nose, joined by some honey and orange blossom on the palate. Incredibly rich and decadent, a perfect after-dinner wine for those of you who may not want the sweetness of an ice wine. 87,


A couple days ago we were in a local liquor store and noticed this one which we didn't get a chance to taste during our tour:

Pears, peach and butterscotch on the nose and palate. Not overly buttery, but the oaky notes are there. Some light notes of minerality. 86.

Sometimes big name wineries get more press than they deserve, but so far my experience with Robert Mondavi suggests that they are a big name for a reason!!